That delights in Bush Politics Based on Steele Rudds...

"Dad goes to Parli...ment"  Is an adaption of our famous Australian Poets. Paradied from the pen of playwright and Touring Specialist  Mr Paul Sherman RIP

Along with poetry, prose & song!

MC for the ALM Conference in Cairns and Brisbane

MC for the Australia Day Celebrations

Lawson's 'Romancing the Swag' and 'The Loaded Dog'

A DEBATE on which is the best way to sing 'Waltzing Matilda'.  Not to mention Dave in a petticoat and a theatrical mop as a wig does a parady on the snobby 'Miss Mulrooney' as she is visited and scared out of her clothes in 'Spider by the Gwider'

Who can COOEE the loudest always a favourite. And Dave reckons the mob look like a mob of sheep.

If you LOVE a sun burnt country and a dog with a bladder problem and you wanna learn to count so the wheat won't be a worry to Dad, then develop your brain which is what Steele Rudd asked a nation to do 100 years ago. Community,Corporate and Festivals Agree 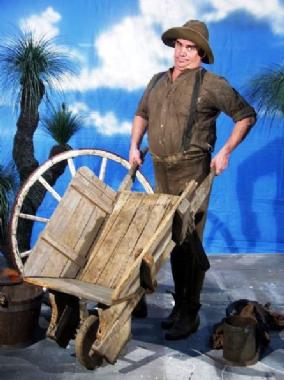