GEMS OF THE NILE BELLY DANCING

Samantha started dancing at the age of 6 yrs. and won the  Junior championship in  ballroom, latin and New Vogue at the age of 11yrs. At the age of 15yrs sam was a qualified dance teacher. She stills studies and does more exames to keep up on new and exciting things.

I started Belly dancing in 1993 in Queensland and quickly came up the ranks, taking out 1st place in the oasis dreams competition in 1998 for solo and 2nd place in 1999 and 1st place in 2000. Samantha has done workshops with some of the finest belly dancers both here and in the middle east . Aida Noir, Caroline Evanoff. Michelle Joyce, Mo Gadowe just to name a few.

Samantha has also worked with and continues to work with Dean Vegas. The Gems have also done work with 92.5 Gold FM with Richard and Sarah and has also done work  for Sea FM. where Sam also taught  Mora and Linda from the news room. Samantha and the girls also go and entertain the elderly from Gold Coast to Banora Point even up to Brisbane and and Sunshine Coast. Samantha and the Gems have had the Bulletin and Gold Coast papers ringing up to do stories about them.

Samantha also fuses some of her belly dancing routines with Flamenco and Tahitian Dancing for which she is an accomplished dancer in Both. Having gone to Egypt in March April 2007, Samantha learned even more about this art form and intends to go back in 2009 to improve her knowledge and to bring it back for all those who wish learn. 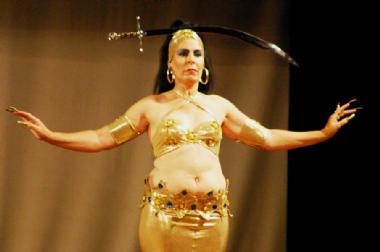