Travel Information: Australia & Worldwide
Request a Quote
This extraordinary Caricaturist is a must to add a comedy souvenir for your next event.
Caricatures are a popular form of entertainment for a number of reasons……
Caricatures take from 5 minutes drawn from table or easel, but also may be drawn roving.
Shorter times are possible with another product called "Speed" Caricatures.  Simply put, the Client can request the number of subjects needed to be drawn in a given timeframe and Wayne can advise if those figures are possible.
Speed Caricatures prices are from 50% markup to the General Live "Quick" Caricatures advertised, and are subject to Terms.
YOUR EVENT WILL BE ONE TO REMEMBER
AS PATRONS ARE CAPTURED IN THEIR
NATURAL CHARACTER WITH THEIR FAVORITE HOBBIES
Wayne Fleming been an established, illustrator on the Sunshine Coast since 1986
His early highlight commissions include caricatures for the entire Norwood Football Club, a prominent SANFL team, during their historic Grand Final Victoy in 1984 and tshirt designs for Golden Breed, a prominent surf and sport clothing company.
Since 1991 Wayne has been commissioned by The Hyatt Regency in Coolum, Queensland as a regular caricature artist in their popular Village Square.
As a result of working in public, often under extreme pressure, Wayne has developed a signature style in his line work known as speedhand, which  he teaches to all ages both privately and at various educational institutions.
He now has his own special workshop program, aptly titled, 'Teach Yourself to Draw', which is both practical and holistic and has proved to be very effective, producing some amazing results, even in the most artistically inept students.
Wayne's illustrative capabilities outside of Caricatures are as diverse in style as his clients and market demand.

2015  The Permaculture Student – Illustration for Training Manual by US author Matt Powers.

2000 Commisssion by B.H.P. to illustrate cartoons for their training manuals.1993 'Introduction to Permaculture' by Author Bill Mollison. Front cover illustration

1998 'TASHATAK'. A private commission to create a series of dog cartoons to print as gift cards with a sardonic twist to humour and captions.1992 'Permaculture International Journal' 15th Anniversary issue. Front Cover Illustration

1998 Mural commission of the 'Live Wire Bar' for Conrad International Jupiters Casino in Brisbane, Queensland.
1996 Resident caricaturist at the 'Hamilton Island Resort' at The Whitsundays in Queensland. 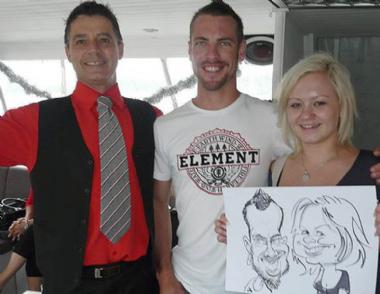