Christmas just isn't Christmas without Holly the Christmas clown. Holly loves Christmas and can't wait to help make it magical for everyone. She will bring colour, zap, jolly good fun and stocking loads of cheer to your event. Holly is a bubbly, high-energy clown but one who is also sensitive and able to change gear as needed. She is a multi-skilled clown who can make balloons, do magic, spin plates, juggle, dance, be very very funny and lots more. She is wildly popular with kids and is often approachable and accessible to those children who in the past have been a little unsure of clowns. She is very good at responding to individual children as well as whole groups and she always has something for the adults too. Holly will make you smile at Christmas. Don't miss her or you'll have to wait until next year! Rachel has been performing professionally for over ten years and has worked at a broad range of events in Australia as well as overseas. She has trained extensively in a range of skills areas including clown, improvisation, circus, mime and character comedy. As a clown she has trained with internationally renowned clown teacher Angela deCastro as well as a number of other highly regarded teachers. As well as being an accomplished performer she is a friendly person whose love of her work comes across in her performances. As such she is an engaging performer with a contagious energy and zest. 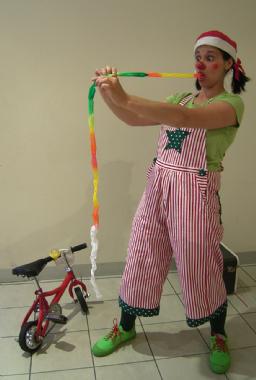