The two have been successfully entertaining children (and adults) of all ages for several years, with appearances on Hey Hey It's Saturday, The Midday Show, the London Palladium, P&O Sitmar and CTC Cruise Lines as well as programmes for the UK’s BBC which included Cracker Jack and The Seaside Special.

TV Commercials, major shopping centres throughout Australia and pantomimes such as Dick Whittington and Cinclerella. He is currently starring in his own adaptation of Mother Goose aptly titled 'Emu Meets Mother Goose'.

Marty's hard work in Show Biz has been rewarded in recent years by winning three Australian Entertainment WW Awards and the Variety Club of Australia's prestigious Gold Heart Award in acknowledgement of his excellent work and professionalism in entertaining the underprivileged and handicapped children throughout Australia.

The 'Marty and Emu Krazy Kids Show' is a fast moving, self-contained bundle of laughs. The show's format is as follows:

2. Marty enters stage singing 'If You're Happy and You Know It Clap Your Hands' 3. Marty greets kids - produces a few sight gags then sings Jake the Peg' with three legs.

The show is of 35 - 40 minutes duration, but con be extended to one hour if necessary.

us if you can & Melbourne tonight 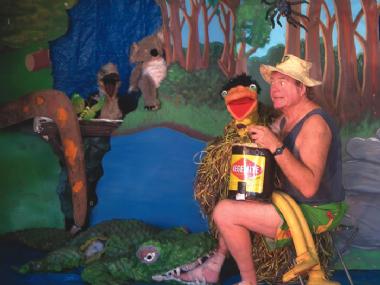