The SeaStar Rock live show is an interactive musical performance for children 10 years and under, promoting  sustainability through song, dance and games. The main aim is for children to sing along, dance, learn about the marine life , sustainability and of course have fun! It is perfect for schools, playgroups and festivals and can be adapted for any function. Children will join in games such as ‘Seaweed Shelters’ and ‘Wally and Polly's Orders’ and hear jokes from the SeaStar Rock team. They’ll cha cha with Chino Crabclaw, tap dance with Terrance Turtle, and dance the waves with Surfing Snapping Starfish, as he saves the seas from plastic bag monsters. Big Blue Bopping Whale will be bopping at the Underwater Fish Cafe, whilst Harriet Hammer Shark sings her ‘Shark Grin’ tips at the Icy Pole Studios. If you’re looking for an action packed underwater adventure, with educational flair, come and join the SeaStar Rockers because " just below those ocean waves there's a storming dancing party!"

Teachers will also receive an educational activity booklet which could be used to support the New Australian Curriculum, in particular, Sustainability, The 7 General Capabilities with links to The Arts, English and Science. SeaStar Rock also supports the five Learning Outcomes of The Early Years Learning Framework.

LER Productions was founded by Lucy Rasheed in 2012. Lucy graduated in 2006 from The University of South Australia with a Bachelor of Education/ Drama Specialist degree, and has since taught drama in various educational settings including Australia, London and Sri Lanka.

Lucy has also obtained an Advanced Diploma in Acting at the London School of Dramatic Arts. During her acting career she has written and starred in the production ‘Fame or Fries’, which had international success and received runner up in her division for best Comedy at the Edinburgh Fringe 2010.  She has experience in theatre, television and film in both the UK and Australia and continues to work in the Industry.

Lucy worked with local and international musicians to produce the ‘SeaStar Rock’ children’s CD, which in turn has provided the foundations for her live performance.

The ‘SeaStar Rock Show’ has performed at Peat’s Ridge Music Festival and The Sydney Festival, 2014 and we debut the new album and show at the Adelaide Fringe 2015. We have since performed at schools, festivals and club including; Whale Time Fun Time, Dolphin Day, Publishers Art House, The Queen Adelaide Club and East Adelaide Primary School. 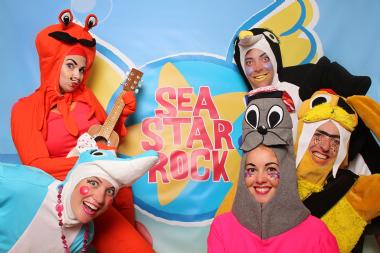