Shaggles Magic Circus World is an all inclusive one man circus extravaganza designed specifically as a children's show but definately not limited to children. Shannon has developed this character from humble beginnings 12 years ago as a roving bumbling clown to todays highly skilled professional performance as a circus ring master.

During this one hour show the audience is introduced to Shaggles' world via his puppet "Bruce" the koala who has never been in the circus before and needs to be trained up. After Bruce has finally completed his trick Shaggles brings out the famous South American Juggler "Rod Riguez" to dazzle the audience with his skills. It is then the audiences turn to teach the inept Shaggles how to juggle.

Witness his death defying dive through the "Hoop of Death!" and be enthralled as he balances several objects on his chin. Finally the crowd reaches fever pitch as the finale trick is performed with an audience member and a new "Star of the Circus" is born (Yay! Yay! Yay!). But that is not all! To finish off the event Shaggles will make balloon animals for all the guests or for an amount of time if there are too many people.

Shaggles (Shannon McGurgan) Learned his skills all over the world including Carrie Hellers Circus School in Atlanta Georgia and The National Institute of Circus Arts in Melbourne Australia. He has performed in The USA, Taiwan, Japan, China and Turkey as well as shows all over Australia. This act is a highly polished and slick children's performance. Show length- one hour Tech specs- a space of about 3 meters square 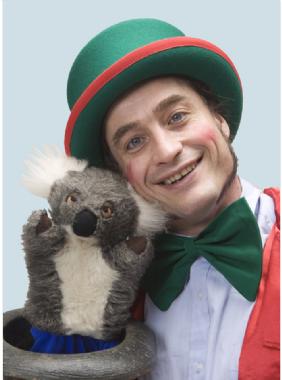