The Giant Santa show and the Nutcracker parade is a versatile Christmas act which can adapt into any environment. A roving stilt Santa, performs solo or with his biggest helper, stilt walking Santa Girl, Holly. To add a musical flavour Santa sings all your favourite Christmas tunes with his Nutcracker Soldier band. This is a wonderful stage act, or roving parade.

This act is performed by some of Sydney's best and most experienced musicians and circus artists. The Giant Santa show featured at the Grand Indonesia in Jakarta throughout the Christmas season last year. 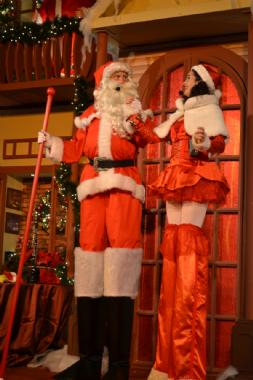