After all those years of leaving biscuits out for Santa, this result was inevitable. Giant Santa and Mrs Claus are bigger, better and more jolly than ever! They spread Christmas cheer and people of all ages adore them. As always, Santa and his wife love posing for a photo but you'll need a wide angled lense!
These popular characters never fail to engage their audience with their looks and their winning personality. People flock to hug, grope and pose for photos with them. Giant Santa and Mrs Claus can perform at both indoor or outdoor events. They are the perfect entertainment for your Christmas event.

All our performers are experienced in comedy improv, stand up comedy and street theatre. Our acts are not just visually spectacular - we deliver the laughs.

"Such a massive hit, not just with the kids! I still have people telling me how great they were!" Larni Pilgrim, EMC Group Geelong, November 2012 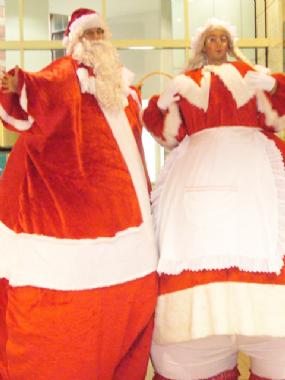