The Act In addition to the expected shock value, Bobby brings character and drama to the time-honored tradition of the sideshow. During his act, Bobby will perform three different intertwined sideshows skills with a never-before-seen twists!

First, Bobby will break a wine bottle and add the sharp shards of glass to a pile of previously broken bottles. He will then remove his shoes and stand barefoot in the glass. Next, while maintaining character, Bobby will produce a 3-inch nail and hammer. The nail will then be nailed into Bobby's sinus passage! Bobby then goes a step further and balances a small bed of nails on a rolling cylinder.

With bare feet, he stands on the bed of nails and balances atop the constantly moving cylinder. Bobby's final twist will have the audience laughing and cheering in delight! Unlike traditional sideshow characters, Bobby doesn't spruik and use rhetoric to drive the performance. Shunning the cliched atmosphere of shock and awe typical of most sideshow acts,

Bobby brings an air of innocence and investigation to this refreshing and entertaining act. The Performer I have been performing either in the ring, on the stage, for private parties and cooperate events for 20 years.

I have trained with coaches from Russia, Mongolia, France, Argentina, Australia, and the USA. I have a wide variety of skills as well as characters that I perform. Some of the major shows that I has been fortunate enough to perform with are:

and countless private events in clubs and venues across the USA, Hong Kong, South Pacific and Australia. 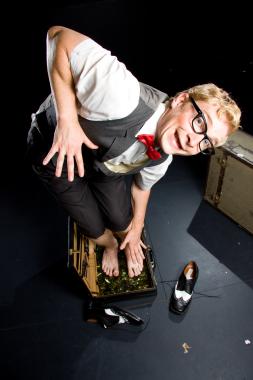