*Lots of Audience Participation! ... and all in the one show!

plus *Balloon Modelling and *Face Painting on request.

RED'S performances are tailored to meet your specifications having extensive experience performing at:

RED'S work is individual, great fun and speaks for itself with over 300 performances per annum throughout Victoria and interstate.

RED has the skills to entertain general audiences as well as shows designed for specific age groups.

Magic, Unicycling, Juggling, Devil Sticks, Stories & Songs. Lots of Audience Participation … and all in the one show!  plus Balloon Modelling and Face Painting on request.

Red the Clown has become a legend to generations of children. With a career spanning three decades, spent entertaining and educating youngsters to the joys, thrills and challenges of performance, Red has earned himself a reputation for being one of Australia’s most renowned clowning characters.

Red’s style is a loveable blend of the traditional and contemporary in clowning, reflected not only in his modern styled costuming coupled with full face makeup, but also in his dynamic yet sensitive approach to his audience.

One of Red’s most notable achievements has been his ongoing role as a children’s entertainer at the Queenscliff Music Festival, and for being one of Melbourne’s go to clowns for his diverse range of skills, professionalism and warmth. He’s also known for volunteer work with the disabled and disadvantaged and has, without doubt, achieved his aim of becoming a performer whose work is accredited with his longevity and success in the entertainment industry as testament.

Red has worked with children (and adults) of all ages and much of his year is spent entertaining at preschools, primary schools, libraries, shopping centres and festivals. Red performs shows that have a generic appeal across the age ranges or he will design his show for specific age groups. The shows are predominantly magic interspersed with juggling, jokes, lots of opportunity for audience participation and a particularly scary balloon trick involving a rather large needle. Red also performs roving entertainment with great close up magic, unicycle, juggling and balloon modeling as he circulates throughout the event and, without fail, bringing laughter and smiles to all those he encounters.

Another string to Red’s bow is his Circus Workshops. In the workshops Red teaches the children confidence in taking a simple idea, applying a bit of pizzazz and costuming and turning the idea into a performance piece. Teaching juggling skills that children can take away with them or utilise in their act, Red inspires the children to meet the challenge of a performance. Workshops can be designed to go for half a day, a whole day or as an artist in residence exercise.

To sum up, Red the Clown is a professional children’s entertainer who is one of the leaders in his field in all aspects that count towards what people want in a clown …. unflagging entertainment value and integrity 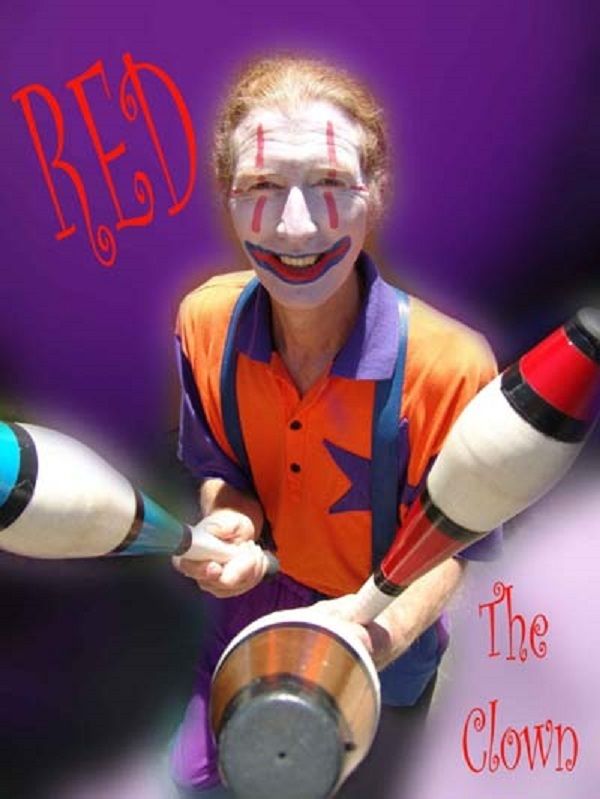