Toggle performs magic, plays games and takes audience members both big and tiny on an imaginative journey into his own foolish funny world. Toggle is a clown who can entertain very small children as well as older children and adults. In traditional white silks, Toggle is a cheeky unicycling, juggling and tumbling clown. He can perform as a mime or on stilts if required too.

For Christmas this year, toggle carries a large, shiny red present box that his Mum put under the Xmas tree. He knows he should not open it, but when it makes strange sounds and juggling tools accidentally fall out the bottom he knows he must get them back in the box as neatly as possible - if he can only stop himself juggling and doing all sorts of tricks with them! Toggle has Performed for the Logie awards party as well as for many years in Westfield shopping malls in Canberra (flown in from Melbourne!)

Danny Diesendorf has been performing street theatre and working as a professional actor and clown for the last sixteen years. He is a graduate of the Victorian College of the Arts Theatre Making Course (Grad dip Animatuering). He has also trained in London at the physical theatre school Ecole de Mime Corporel and has done training intensives in clowning with Phillipe Gaulier. He received a comedy award from the Melbourne Fringe Festival in 2003 and performed “Toggle the Clown” at the Logie Awards 2006 and performed a variety of acts at the Sydney 2000 Olympic Games and Paralympics.

Danny has also been contracted to perform at Westfield shopping centres in Canberra over a period of many years. When creating clown and street performance Danny aims to entertain people of all ages, from small children to their grandparents. His style of clowning is playful and never patronizing, drawing on the innocence and lateral thinking of the essential clown. He has a wide range of performance skills; including juggling, unicycle, tight-rope, stilts, close-up magic, fire-stick and break-dancing, which he weaves into his acts. Danny currently works as an actor with Melbourne Playback Theatre Company. He has appeared on television in the ABC drama Bastard Boys. 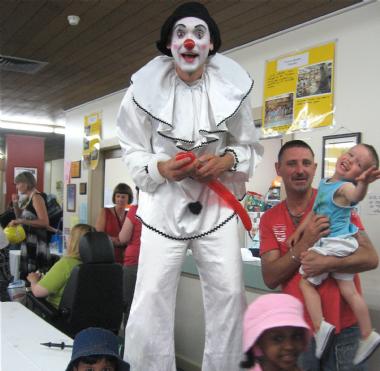