Satirical songsters Geoff Sirmai & David Fisher make your special event truly unique by dishing up made-to-order musical comedy. They’ll help you celebrate the achievement of a notable individual or the whole group. Celebrate your success with laughter and a good-natured send-up in song.

Give them the dirt and they'll do the deed!

Brief Comic Roasts on your company, the 'big boss' or the whole team and they'll create and perform an original revue that puts the whole gang in the spotlight! It's music, it's comedy, it's satire... all set to familiar tunes. They'll even create a corporate ‘anthem’ to get everyone singing along.

Your very own tailor-made comedy revue, ideal for

Here are just some of the major companies who have enjoyed an original Comic Roast:

"A night to be remembered by our important customers." - Caroma

"Your performance got the Lego team into a very happy party mood..." - Lego Australia

“Your St. George Anthem was fantastic and had people raving.” – St George Bank

“Brilliant. The team are still talking about it and having a laugh. A really professional job!" – Australia Post

“What a success! Our family and guests all thrilled to the fun... you hit the nail on the head in every way. Well done Geoff & David!” - Gil Nabaro

“The real highlight of the conference.” Telstra

WHAT IS A COMIC ROAST?

Imagine you're at a conference dinner, company celebration, client function, 'send-off' or other special event. Everyone is pleasantly relaxed...  but with no idea of what's to come.

The MC rises to the platform to introduce the guest presenters - two "top investigators" from the industry regulatory body! Eyebrows raise.

It seems the pair have been going over the organisation with a fine tooth comb, trawling through HR records and enjoying full access to staff e-mails. "Please give them your full attention." There are looks of concern all around!

The pair accept the polite, if nervous, applause and announce they're about to release their findings. Then they explain they don't go in for the usual audio-video props and toys - 'Death by PowerPoint'.

With a flourish, the pair launch into their musical-satirical routine, David at the piano, Geoff at the microphone. As the laughter flows, the organisation is parodied and pilloried, the boss is gently barbecued (medium rare... just pink!) and staff are celebrated in song. Familiar 'issues' are set to well-known tunes, the team's successes and slip-ups immortalised in popular song. And the spooky thing is: it seems like these guys really do know your organisation inside out!

And when it's time for the big sing-along finale, the audience doesn't need a second invitation to join in! Hands on heart - with lyric sheets in hand - the whole room sings along loudly and proudly to their own new 'anthem'...

Nothing could be more morale-boosting or team-building. Or more fun.

This is the unique appeal of a Comic Roast!

WHO ARE THESE JOKERS?
Geoff Sirmai and David Fisher are experienced performers who have roasted, toasted and musically mauled clients at major theatre venues, international hotels, clubs and conference centres. Well known to stage, TV and radio audiences, they have hosted Theatresports, recorded for broadcast and between them produced and presented all kinds of shows.
With a BA in Music and an MA (Hons) in Australian Drama, Geoff's stage credits include lead roles in plays, operas and musicals from Belvoir Street to Bondi, the Sydney Opera House to the Seymour Centre and he is a regular star of Theatresports. A nationally known former columnist, TV reporter and radio presenter, he is also the author of the entertaining best-seller "The Confident Consumer".
David is an accomplished musician and comedy writer/performer who has sung with the Australian Opera Chorus, Sydney Philharmonia, Bel a Cappella and Coro Inominata. He has starred as the musical improviser in Theatresports, as musical director for stage musicals and as keyboard player in hundreds of concerts and on Burke's Backyard!
MEDIA REVIEWS
"Comedy Duo with a difference... their musical satire and crafty comedy is a staple on the corporate circuit." - The Sydney Morning Herald
"A really good laugh." - Australian Financial Review
"Hilarious satirical review." - Nine to Five
"Effervescent talent... absolutely splendid panache." - Opera Australasia
ROAST THE BOSS! TOAST THE TEAM! CELEBRATE YOUR SUCCESS! 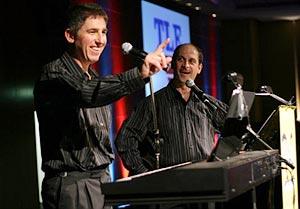