Cop On Heat combines the stories, characters and architypes of the famous Police and Detective shows and lets the audience insert their suggestions for a great plot, charismatic criminal and baffling crime. Working with comic improvisation games and hilarious characters, the three comedians create an interactive show full of fun and surprises.

These comic chameleons ask for audience suggestions and then immediately incorporate them on-the-run in their comedy sketches and scenes. Relying on their quick wit and bold instincts, our comedy daredevils invent comedy out of thin air.  It's like Who's Line Is It Anyway? meets Police Academy, Columbo and Thank God You're Here all in one fast, furious and very funny show.

Event Organisers and Newspaper reviewers have called COPS ON HEAT...

"Unbelievable talented...amazing how they are able to think up something this funny on the spot" - Apple Computers

“Improvisational comedy at its best” -BEAT

Technical requirements - these are the responsibility of the event organiser/hirer.:

Cops On Heat need a clear raised stage with at least enough space for five (5) people to spread out comforably.

One radio hand held microphone on a boom stand is required. Radio headset microphones for each performer are needed for audiences of over 60 people or if the room is excessively large or noisy.

Lighting: A brightly lit stage wash is needed. that reaches all areas of the stage 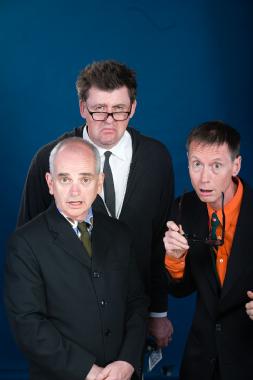