Danny lives on the Gold Coast and can travel from Gold Coast & Brisbane airports.

Travel allowance can be negotiated for slightly further distances.

His mum wanted him to grow up to be somebody.
He grew up to be..(almost) everybody.

Super-Impressionist Danny McMaster is one of the hottest performers in Australia. His star-studded show is considered a "must-see" entertainment experience and one that audiences want to experience over and over again.

If you have a conference, seminar or any type of corporate function, perhaps a sports breakfast, luncheon or dinner, where you need 'something different with a touch of class', then you can't go past Danny McMaster and his ever-expanding repertoire of impressions.

Danny: "I actually had Morgan Freeman contact me through Facebook, he was recommended by a mutual friend to have a listen to my impression of him. He said a nice compliment but the kicker was: "Man! I love your Christopher Walken!" Pumped!

Billy Bermingham (12th Man): “I rate him one of the best I’ve ever heard and we’ve met on several occasions and had tremendous fun. His range is incredible. I put him up there.”

Alan Jones (2GB):"He has an uncanny ear for voices and I especially like his singing voice. It's most impressive. Get along to see him and treasure a true Australian talent."

Ray Martin (Media Icon):"I have seen Danny many times and he never ceases to amaze me with his range and accuracy with his impressions. He just gets better and better. To see a home-grown talent like his is remarkable."

Pat Welsh (Channel 7 Network):"He's fantastic! How he switches from one voice to another so quickly and so accurately is amazing. I love him and he's a good mate too!"

Chris Oxenford (Chairman, Old Bastards):"He is our permanent MC and every year he makes our luncheon THE highlight of the Gold Coast calendar.

Phil Cass (Master Magician):"He's been my friend and colleague for over 30 years and I love his act. He's always re-inventing it which keeps it fresh."

Eddie McGuire (Channel 9 Network):"I don't see him for a while but when I do, he floors me. He simply floors me, every time."

Doug Parkinson (Iconic Singer): “Always get a laugh out of Danny. The voices are the best.”

Richard Wilkins (Channel 9): “I worked with Danny for a number of years at 9 and have seen him perform umpteen times. One of the best in the world.”

(The Late) Richie Benaud: “Tony Greig said (when he was alive) that there was this bloke at Channel 9 he thought was as good as Billy Bermingham doing impressions of him and then I heard him and then he did me too…and I have to agree. Cheeky.”

CD Tim Donovan (P&O and Princess Cruise Lines):"He is one of the very best acts we've ever had on our cruise lines. Sometimes I think he's too good for here but he delivers every time."

Sam Newman (Channel 9 Network):"Whatever you think of me is irrelevant but I saw him start out on the circuit. His Jack Nicholson "A Few Good Men" speech blew me away but to add Sean Connery and Michael Caine...and then top it off with Daffy Duck!...well, I was on the floor. How does he do it?"

Ray Hadley (2GB):"He's a very talented man. He can give you a belly-laugh and then, in the next breath, make you go, "Jeez, how'd he do that?"

Dermot Brereton (AFL Legend & Commentator):"What he does, I would like to do as a party trick, but to see him do it for an hour...why hasn't this bloke got his own TV show?"

Randy Lubas (Ventura Comedy Club, California): "Danny has performed alongside some of the best comedians in America and more than held his own. He is one of the best impressionists I have ever seen. He's Australian? You sure?"

Ray Warren (Rugby League Commentator): “They call me ‘The Voice’, sorry John Farnham. They should call him ‘The Voices’.”

Ian Chappell (Channel 9): “Kerry Packer only ever employed the best. When Danny did ‘Funniest Home Videos’ we all came in for the treatment and he was the highlight. ‘Live’, he was and is fantastic.

Client to supply: Production / PA with Mic & stand; independant sound sysytem (Danny uses an Apple MacAir laptop that contains his various shows that combines music with video), Screen;  connected to laptop with foldback. Spotlight (not essential but would be beneficial in darkened rooms). 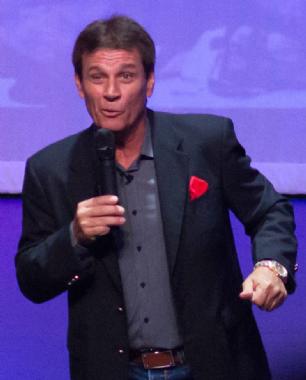