Bloustien's an intelligent and funny guy, laid back and engaging. Here's a comic who knows how to craft a strong line onto any topic – and with the smarts to ensure he’s covering ground few others have trodden.
Steve Bennett, chortle.co.uk

You might not have heard of Dave Bloustien, but you've probably heard one of his jokes. Dave was part of the award-winning writing team on ABCTV's The Glass House, as well as vaudeville oddity The Side Show, the Melbourne International Comedy Festival's Great Debates, and the revamped Good News Week. There are also other programs to which he has contributed to a lesser degree, including In Siberia Tonight (SBS, 2005), The Way We Were (ABC, 2004) and Comedy Inc.: The Late Shift (Channel 7, 2006).

As a stand-up comedian and improvisor, Dave Bloustien has appeared in comedy festivals all over the country, as well as in London, San Francisco, and beyond. He has also written and performed three successful 60 minute stand-up comedy shows at comedy festivals in Melbourne, Sydney and Adelaide. Each was themed around a different topic: Beastly (Africa), St*rf*ck*r (celebrity) and Middle Class Hero (violence). He is now working on a new show about parenthood called "Dawn of the Dad". His corporate work incorporates elements from all four shows as well as additional material.

Most recently, Dave performed at the Theatresports Grand Final at Sydney's Enmore Theatre and the closing night gala of the Hobart Comedy Festival at the iconic Theatre Royal

And he's quite possibly the only Australian comedian with a fully functioning PhD (in Jewish punk), making him officially smart in the pants.

Dry, amusing, politically charged ... enjoy with a good glass of red.
Rip it Up Magazine (SA)

Bloustien has also appeared on two episodes of Stand-Up Australia, as well as various radio and digital comedy broadcasters. He's been heard on the Triple J breakfast show, with Dolphin Juice on MMM, on ABC local radio, 2SER and more. He starred in a promo for TV1+1 and as a 'special feature' on the 2005 Sydney Underground Comedy DVD. He's also written and performed in comedy advertising material for Tequila Digital, Pizza Hut and Real Insurance and is currently working on is first feature film for Quixotic Pictures in Melbourne.

He has performed tailored corporate work for clients as diverse as LG and Autism Spectrum Australia. He is more than happy to be approached for charity and community events, as well as corporate clients. You can see a (fairly unusual) advertising campaign Dave conceived, co-wrote and acted in for World Asthma Day 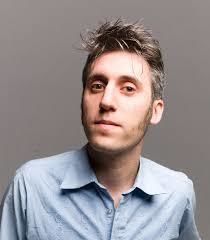