Jan has garnered cult status in Sydney through her many appearances at high-profile charity events, her YouTube series “Uncovering the Cover of Celebrities”, and her highly acclaimed theatre show “I GET THE MUSIC IN YOU, an evening with Jan van de Stool” – which was nominated for best cabaret show in both the Sydney and Melbourne Theatre Awards, and which played to sold out houses in both cities as well as touring regionally.

Jan has since garnered a reputation as a very funny “Inspirational Speaker” and MC for corporate audiences:

“In Jan…van de Zandt…(has) given us a character who provokes simultaneous laughter and shudders and recalls nothing less than the frightmare early-glory days of Dame Edna and Betty Blokbuster”.

“Jan proved to be a fantastic MC and host. Her irreverent humour had the whole audience in stiches...Her pre-preparation was superb and her understanding of the event brought a good balance between entertainment and the message Toyota wanted to convey. Toyota have no hesitation in recommending Jan as your next MC/ event host”.

Jan van de Stool is a self-appointed self-help guru who has invented her own brand of healing called ‘musical therapy’.  As your event’s ‘Guest Speaker’, Jan will construct ‘inspirational’ exercises specific to your particular business, industry or event which will have your guests laughing and cringing in recognition.

Under the guise of healing and self-development, Jan flogs her DVDs, Books and CDs with hilarious monotony, and provides ridiculous ‘inspiration’ in the form of audience participation, that results in side-splitting humour.  Jan’s unsteady grip of the English language as a Dutch-Australian also provides for some of the funniest moments.

The fact that Jan and her ‘inspirational work’ are totally un-inspiring is what makes this show work for any audience – the more she tries to fit in, the worse she becomes and the harder the audience laugh.

“On behalf of the Pier Group of the Sydney Theatre Company, a big hearty thank you for your part in making our STC Cabaret such a success!

You really were the smash hit of the evening - everyone is talking about you - how screamingly funny you were as Jan van de Stool and how brilliantly you introduced the other artists and kept the whole show moving along at a cracking pace.”

“Jan van de Stool was a great success with our guests keeping them constantly amused, informed and on the edge of their seats . . . Particularly appreciated by the committee was the care taken to tailor Jan’s material to the theme of the night, and how entertainingly she included recognition of the all-important sponsors and VIP’s . . . Jan’s participation certainly was an important factor in the success of the evening.”

“It's not always easy to find the right host who is genuinely and authentically funny. Jan is both a safe pair of hands and appropriately edgy . . . Book her before someone else does!”

”In October Queenie Emceed an Innovation Workshop Lunch for the City of Stonnington employees, in which she got even the most introverted person singing with actions. Queenie's show was extremely funny, sophisticated and a bit edgy and got the audience involved in a way that really loosened us up and got everyone laughing. As a result the 70 participants were much more productive and creative than would otherwise have been the case. Queenie was very professional in her pre-show organisation and communication and was able to easily adapt to the changing environment on the day. Attendees were still talking about the event days afterward (and doing the actions to the songs - even two months afterward). I recommend Queenie highly.”
Annette Forde, Library Services, City Of Stonnington, VIC 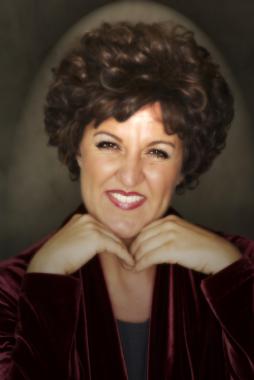