“(I)…am not exaggerating when I say that she possesses a rare quality – a combination of stage presence, wit, intelligence and honesty – that I don’t come across too often.” Michael Pollock, musical director of Second City LA, credits include The Drew Carey Show, The Tonight Show.

“…a genuinely funny lady, very warm and a natural improviser…she explores motherhood in all it's agonizing and bizarre comic glory…with a cheeky smile and a guitar.” LisaLamb.com

In 2006 Jenny was awarded a $15,500 Lord Mayor’s New and Emerging Artists Fellowship to travel to New York, Boston, Las Vegas & LA to train in comedy and improv with the prestigious Second City and more.

Over the past twelve months she has entertained audiences with her passion for musical comedy – satirical and improvised - both locally, nationally and internationally. She was also Queensland’s Runner-Up in this year’s Triple J Raw Comedy Competition.

Jenny has appeared on Brisbane’s 612 ABC, Tasmania’s Huon FM and Briz 31’s Cinema. Each Friday she co-presents The Frog and Peach, the cultishly popular comedy drive-time show on 4ZZZ. 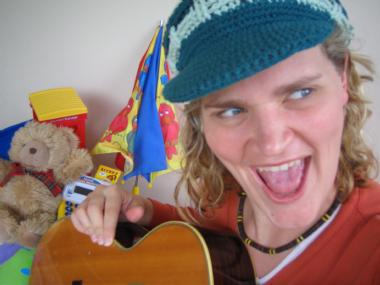