Lindsay is truly an International act worthy of the title, with Six Edinburgh Fringe Festival visits under his belt, as well as plenty of tours across the Tasman (including as an International Guest at the 2009 NZ International Comedy Festival in Auckland). Lindsay has also done many guest spots on TV & Radio, including “Stand up Australia” & most recently on “Good News Week” (CH 10) & “The Footy Show” (CH 9). “7Days” (TV3NZ)

Lindsay has attended the Edinburgh Fringe Festival, Scotland for each of the last 6 years, and in 2006 Lindsay performed his debut one hour solo show “Foolosophy”, receiving a 4 star review (Three Weeks). The show’s success on comedy’s biggest stage was confirmed when it was accepted on the Jongleurs circuit through London and the UK.

In 2007 Lindsay presented another hugely successful show”Lad to Dad”, which was presented both in Edinburgh and in Australia. Lindsay rounded out he year with a very popular Xmas run of his show “Foolosophy 2”. His new show “Hurry up Jesus" will launch in November 2009.

Prior to his solo show efforts, Lindsay’s career was forged across several mediums. He was ‘the funny bloke’ on the Sea FM Morning Crew on the Sunshine Coast QLD for four years, and has been working the Australian Comedy Circuit since he won the Queensland finals of the Melbourne International Comedy Festival JJJ Raw Comedy Competition in 1998. Other competition credits and Industry Awards include:
Finalist, "Comic of the Year" Sydney Comedy Festival 1999.
Best Radio Newcomer, Radio RAWARD, October 2002.
Finalist, Australian Comedy Awards 2004. He didn’t win, and next year the awards were scrapped – you do the math!!
“Best Comedy Host”, QLD Comedy Awards, 2007.

Lindsay’s style features observational comedy mixed with character voices and audience interaction. Witness Improvisation at its finest and awesome interaction with the crowd leaving them with a truly one off experience – until he does it again the next time they see him!
Lindsay has toured throughout Australia and New Zealand. He has appeared with many of the worlds best known Comedians including Jimoein, Wil Anderson, Steven K Amos, Jo Koy, Eddie Ifft, Tom Rhodes, Tripod, Bob Franklin, Adam Hills, Lano and Woodley, Carl Barron, Scared Weird Little Guys, Chris Franklin and Mickey D.
Lindsay is also in demand for corporate functions and the Australian Circuit both for his Stand Up and Master of Ceremony skills.
Corporate Clients
Evans Harch Constructions Sunshine Coast 2007
Optus “Golf Challenge” 2007
Alpharma Pharmaceuticals 2007
Australian Festival of Tennis Hyatt Coolum 2006
St Andrews Anglican School Perigian Springs 2006
DWS
Turnaround Solutions

See you soon for a laugh! 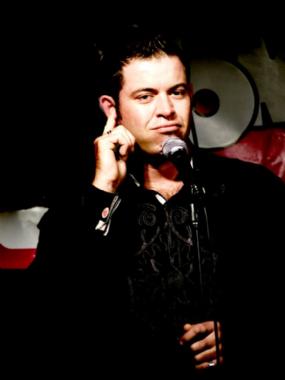