Request a Quote
Time has been an essential ingredient in Pearson & Harvey’s success. Their blend of comedy & musical talent this irrepressible team have made a sweeping impact on their growing number of fans around the world. Such lasting power is a testimonial to their intuitive humour, natural warmth, superlative showmanship & the pure unadulterated joy they bring to audiences of all ages.
Robert & George have always had something to do with the stage, both in amat
eur productions, talent quests & singing in bands when they left school, the theatre has always been part of their lives. George growing up in Australia while for Robert it was the UK until he was 10, then his family moved to Australia in 1969 but their paths wouldn’t cross until 1982.
In 1981 George was asked to join The Four Kinsmen one of Australia’s leading variety entertainment groups who would be a house hold name for many years to come. Robert joined in 1982, this is where their unique partnership developed. Like all great comedy partnerships a kind of 6 sense developed between them on stage.
Over the next 20 years The Four kinsmen won a staggering 27 ’MO’ awards as ‘Entertainers of The Year’, ’Best Variety Performers’, ’Best Vocal Group’ & the ’Peter Allen award for ’Variety Performers of the Year’ and recipients of the inaugural ’MO’ Awards ’Life Time Achievement Award. Plus 4 Australian Club Entertainment awards including another Life Time Achievement Award.
After the Four Kinsmen did their final show sold out show at the Star City Casino in Sydney, Robert & George have continued to work together here and abroad. Their style of music has always been the classic’s, Dean Martin, Frank Sinatra & Bobby Darren to name a few, with their own original style of comedy, they are one of the best musical variety comedy shows in Australia to date .They currently have been performing on cruise ships all over the world, video clips are available by following them on Face Book at PEARSON AND HARVEY.
CAREER HIGHLIGHTS
1981 & 82 Both joined Australia's Leading Entertainers, "THE FOUR KINSMEN"
George Harvey in 1981 & Robert Pearson in 1982

1984 Represented Australia in Japan for the WORLD EXPO with JAMES MORRISON & ROLF HARRIS.
1986 Support for the launch of PAUL HOGAN's 'shrimp on the barbie' commercial campaign at the Australian Embassy in Los Angeles, California.

1995 Headlined at the sponsors/competitors gala evening in San Diego for the America's Cup Challenge.
1996 Headlined at the HACIENDA HOTEL on the strip is LAS VEGAS, becoming the first Australian performers to perform their own show in a major hotel on the Strip, being listed by 'Las Vegas' Sun critic Joe Delaney in the 'Top 8 shows on the Strip' alongside every major act in the world.

2008 BARBMARK ENTERTAINMENT takes over as management


Some of the comments they have received from overseas are:....one of the most enjoyable and unique acts we have ever contracted for the Kentucky State Fair".JULIE SHAW, DIRECTOR, KENTUCKY STATE FAIR

"Not since the glory days of Las Vegas have I witnessed such good singing,solo and as a blend, hilarious inventive comedy and entertainment. JOE DELANEY, ENTERTAINMENT CRITIC, LAS VEGAS SUN

"I have never seen an act with the impact on the State Fair market.. what great ambassadors for your country".D. SNOWDEN, PRESIDENT, TRIANGLE TALENT LOUISVILLE KENTUCKY.

AWARDS1983: Presented with the Keys to the City of LOUISVILLE, KENTUCKY as Australian ambassadors and made honorary Colonels of the Commonwealth of Kentucky.

1986: Presented with the 'DEVELOPMENT AMBASSADOR AWARD' by the New South Wales Government for their contribution to tourism and for carrying the Aussie flag overseas with fellow recipient Paul Hogan.

1999 - 2002: Winners of 4 Australian Club Entertainment 'ACE' Awards as 'Entertainers of the Year' and the 'Lifetime Achievement Award'. 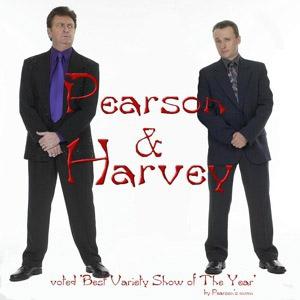