Request a Quote
"Comedy doesn’t come much better than this. Seriously." The Herald Sun, Melbourne

As a solo artist, Frank Woodley continues to earn the adulation of critics and audiences alike.

After twenty years as one half of the much loved, Perrier Award-winning Lano and Woodley, Frank said Good Bye to Lano and Woodley in 2006 with a national tour that took in 34 markets and sold more than 125,000 tickets.

"As universal as it is timeless" The Guardian, UK

In the two years since hanging up his hat, Frank has concocted his biggest show yet in Possessed. As the driver of many of the more physical aspects of Lano and Woodley, it is no surprise that he has taken this to a new level with his solo work, which is currently touring the country. The effortless shift in and out of crafted comedy material and improvised chaos is as much a feature of Frank solo as it was a part of Lano and Woodley.

"A unique brand of larrikin absurdity that is never less than clever and frequently brilliant." Sydney Morning Herald

Having made his solo debut with his 2003 Melbourne International Comedy Festival show, The Happy Dickwit - which was described as "a triumph" by The Age - Frank has since extended the experiment, regularly working the Melbourne circuit and the Sydney Comedy Store. He also appears regularly on ABC TV’s music quiz show Spicks and Specks and Network TEN’s Thank God You’re Here.

"Irresistible comedy that will have you giggling like a little kid." The Sunday Mail, Adelaide 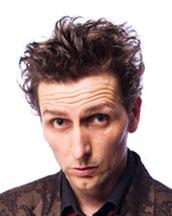