mid-90s usually as characters such as the Bull Terrier-loving Ian from Hills, the devious youth arts officer Art Admino or Barry the Boring Bush Poet.

A few years ago Alex became aware of a dark and perverse desire to wear spectacles and false eyebrows to become his twisted alter-ego known as John How-Odd. After learning to adopt the hip, confident swagger and raw sexual energy of our Prime Minister, Alex began performing the character in comedy clubs, corporate functions and  the 2001 Melbourne

The act includes John discussing the secret to his long marriage to Janette, tips on how to be more like the Prime Minister, his love of cricket and a demonstration of how to meditate the John How-Odd way!  Alex can also write material for John to perform especially for your function! 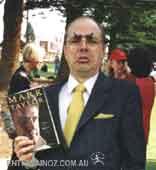