King of the Cockney Funny men Peter Dean. Peter is known for his comedy, sound effects, vocal impressions and of course is “the man “ when it comes to the blues harmonica.

Having fourteen Mo Award nominations to his credit undoubtly ranks him in the top five comedians in Australia.

Wether it is 18 or 80 year olds he is entertaining, his comedy is ageless and adaptable.

His Ray Charlse impression is so uncanny and done with such soul you’d think he was black—even when the lights are on. His Tom Jones and Joe cocker impressions leave them rocking in the isles.

Peter had a successful career in London prior to immigrating to Australia and has played the London Palladium and on such T.V. shows as The Comedians.

OFTEN REFERRED TO AS THE COMICS COMIC

Having fourteen Mo Award nominations to his credit, undoubtlv ranks him with the best comedians in Australia.

Tours through out Australia – NZ – Fiji – England, “ The Very Best of British”, “ Carry on Laughing”

Peter has worked with Australia's top sporting identities, and performed, with the finest entertainers. His customers base is extensive, as is, his versatility.

Tom Jones and Joe Cocker impressions leave you rocking in the isles.

With a  successful career in London prior to immigrating to Australia Peter hits adapted well to Aussie audience's, blending strong British warmth with a wicked wit.

He has toured with the greats such as, Roy Orbison, The Village People, Tom Jones, Cilla Black, and many more.

Peter has a unique style that will suit every occasion 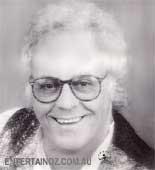