Request a Quote
Heard It On The Wirelss

If you think you’ve heard it on the wireless, you’ve never heard it like this!

Fresh off the ship in their packed up Morris, after sell-out seasons in the U.K, and New Zealand, The Kransky Sisters are unloading their baggage and bringing to you, their hit show, "Heard It On The Wireless". Venturing far from the dusty curtained private world of their old family home in Esk, rural Queensland, Mourne, Eve, and their oddly reclusive, almost forgotten sibling, Dawn Kransky, bring you their darkly funny stories from across the countryside, and uniquely homespun versions of popular tunes heard on the old wireless. The combination of their strange behaviour, blinkered outlooks, superbly droll comic dialogue, and alluring downright hilarious brand of tune make for a night of sheer delight.

Due to the mysterious disappearance of tuba playing, Arva Kransky, who was last seen exchanging sheet music with a member of the Hornbell Military Marching Band, the Kransky Sisters have enlisted the assistance of their rarely visited, reclusive sister, Dawn Kransky, who has taken leave of her job as trolley librarian at the Esk Hospital to be with the Kransky Sisters for their 2007 season.

Both Dawn and Arva Kransky studied the Tuba at Tafe Toowoomba with Arva preceding Dawn by two years. On her return, Dawn moved into as neighbour’s laundry, after discovering her three sisters had commandeered the house. Dawn has rarely performed before an audience, aside from the early years, when her sisters would play together as children at the Esk fairs while their mother sold, among other things, her tasty fudge.

Now, on an old 60’s reed keyboard, guitar, musical-saw, tuba, and cooking pot, these unworldly sisters offer their offbeat illuminations on what they hear on their wireless and see in the magazines. Their unusual musical act draws on naiveté, spinsterhood and the somewhat gothic existence that forms the world of three eccentric sisters. Every show throws up whole crowds of Kransky converts.

Witness the lilting harmonies and offbeat humour of the sisters as they accompany themselves on an old 60’s reed keyboard, Tuba, Musical-Saw, kitchen pot, toilet brush and fervently shaken, duelling tambourines. The Kransky Sisters cover songs from Nana Mouskouri, The Carpenters, SugaBabes and Pink, to Skyhooks, Steppenwolf, ACDC, Eurythmics and Talking Heads. The combination of their strange behaviour, blinkered outlooks, superbly droll comic dialogue, and alluring, downright hilarious brand of tune, all makes for a highly entertaining brew.

This close-knit family of unlikely entertainers and their odd-ball music have warmed many hearts after their hit show "We Don’t Have Husbands" received a coveted Best-of-Festival Barry Award Nomination, and won ‘The Age Critics’ Choice Award’ and the Melbourne Airport ‘Best Newcomer’ Award at Melbourne International Comedy Festival 2004. Following that the show earned them A Green Room award, an Australian Entertainment Mo Award, and most recently, their latest Show "Heard It On The Wireless" earned them a Bank Of Scotland Herald Angel Award for excellence, in the Edinburgh Fringe Festival 2006.

If only you’d had the courage to visit those weird old aunts of yours years ago, you wouldn’t have had to wait until now to experience some of the joy The Kransky Sisters have to offer - a night of music and comic performance so tuned out, its tuned in! An absolute 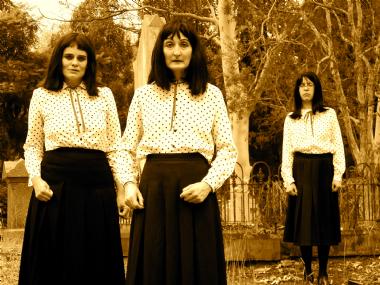