Request a Quote
Wayne Dixon made his comedy debut at the Star & Garter in the 1999 Triple J Raw Comedy Competition. He made it through to the State final and since has continued making people laugh. With his unique blend of charm, likeability, intelligence and sometimes idiocy, it's hard for anyone not to fall in love with this larrikin - or at least buy him a beer.

Wayne has been earning his stripes since then. In 2002, he won the FHM Joke Off in front of thousands of people on the comedy stage at the M-1 concert in Melbourne in addition to being voted Funniest Bloke in Australia by Austereo listeners nationwide. This sparked the interest of the Melbourne Comedy Festival, and scored Wayne his prestigious position in the 2003 Comedy Zone, a Comedy Festival produced showcase of carefully selected fresh Australian talent. As a result of his consistently impressive performance during this show, Wayne toured Australia as part of the renowned Melbourne Comedy Festival Road Show, representing Australia alongside international acts such as Daniel Kitson, Danny Bhoy and Lee Mack.

For the 2004 Comedy Festival, Wayne teamed up with comics Geraldine Hickey and Harley Breen to create A Harley shaped Hickey called Wayne, a risk-taking show which cleverly blended stand-up and improvised comedy and received rave reviews. These 3 comics then went on to form the core of the impro group Cut & Paste who regularly perform sold out shows in Melbourne. 2005 saw Wayne embark on his first solo Comedy Festival, Citizen Wayne. His popularity amongst both peers and punters of the Melbourne comedy scene was unmistakable during this venture, and Wayne received warm responses at every show.

This young fella has worked with all of Australia's best-known comics as well as many international acts, and performed in the best comedy venues in Australia. However, after relocating in late 2005, Wayne can be found mainly in the comedy pastures of Sydney. He is 26, allergic to boredom and has successfully completed a Bachelor of Music at the University of Melbourne and holds a certificate IV in Small Business Management.

2005 Syn FM - 90.7 (Victoria) Wind-up Host (Tuesdays)
Wayne's stand-up comedy clips can also be heard all over Australia on the Austereo Network and he has also made several publicity appearances on various radio stations. 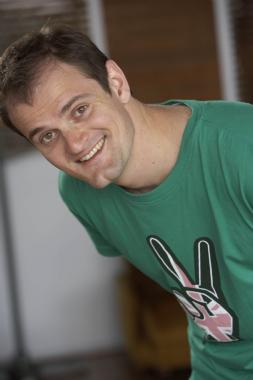