Who's Your Daddy? (the funny side of parenting)

Terry North and Pete Melrose, along with some very special guests, have been wowing audiences with their hilarious take on parenting in the 21st Century. Since first appearing at the 2009 Melbourne Fringe Festival,

Who’s Your Daddy has gone from strength to strength in the St Kilda Laughs festival and the 2010 Melbourne International Comedy Festival and Adelaide Fringe Festival as well as numerous football club fund raisers, several corporate shows and even television spots. Terry North is a former writer for Hail and Pace and a veteran of the stand-up circuit in Melbourne and across the country, and his native UK. Pete Melrose, a Melbourne Comic who lives in Brisbane and is also a Child and Family Therapist.

“Reviews have been very positive, the show seems to hit a familiar nerve with the families who have seen it. “Even couples without kids are laughing, it must be great being able to relate, from a safe distance”

This is what they siad in Melbourne and Adelaide.

Who’s Your Daddy? The Funny Side Of Parenting?The Ambassador’s Hotel – Ambar Lounge, Thu Mar 7 ?With many a reference to sleep deprivation, it’s evident that sleep-deprived and sex-starved parents need a bit of a laugh to get ‘em through the Lego-filled nights. They’ll get it here. The laughs that is, not the sex.?Tonight’s grab bag of parenting anecdotes is delivered by experienced comedians and fathers; each night the line-up will change. Among those who entertained us were: Eric (the Submariner) who was charming even when plugging his own show instead of displaying a photo of his kids; Chris Franklin, Pete Melrose and John Burgos and compere, rapid-fire comedian Terry North. So if you find that Radelaide’s turned into Dadelaide this show will offer an insight into a huge range of lifestyles, loves and laughs.?You don’t have to be a parent to be able to imagine the truths told here; a funny, clever and lively journey for parents who will relate all the way to the hospital.?Final Word: Genial.?Jenny Smith?Who’s Your Daddy? continues at the Ambassador’s and the Tuxedo Cat until Sat Mar 16.

Who's Your Daddy? at the Elephant and Wheelbarrow until April 22

PARENTS, get ready to take an amusing look at your own lives.

Prepare to shake your heads and chuckle at familiar tales of spoilt, nosy, but loveable kids, crazy relatives who are only interested in your lives the instant your baby enters the world, and the trying condition that is pregnancy – trying for the woman, yes, but mostly for her partner, according to these male comics.

Fronting up to host the show, and deliver some of its best material, is British father-of-five Terry North. This veteran comic had the audience in stiches talking about his smart-arse tendencies, the night he lost his virginity and re-enacting a smutty joke he pulled on his wife with his six-year-old son’s toy dinosaur.

Dad number two, Mooroolbark father-of-three JJ McLean, was at his best when telling the audience how he tried (and failed) to comfort his wife on the eve of her 40th birthday.

The last dad to grace the stage – Greek-Australian actor and comedian and new father George Kapiniaris – ranted hilariously about the traumatic experience that was his wife’s pregnancy, his meddling Greek aunt and his hatred for Dora the Explorer.

Parents will adore this show, and non-parents will still get many a laugh.

Despite a rigorous schedule of shows, the boys do not seem to lose any of their energy. “Every night is a bit different, we love doing this show. with guests that have included some of the biggest names in Australian comedy, both Mums and Dads, these guys come together to put on a stand-up comedy sensation for the dads and mums and everyone else. 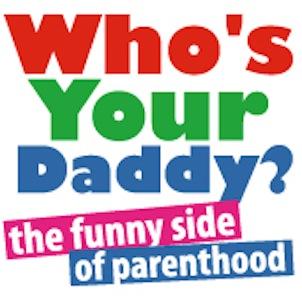