The lights dim… the murmurs hush… the audience stir with eager anticipation… then suddenly in a blaze of light, Greg Anderson appears weaving amid the amazed spectators on his pure bred Quarter Horse Stallion, as he sings to the mesmerized crowd”.

The critics, stars, and audiences alike have hailed this show, saying it would have to be one of the most outstanding shows in the world and one not to be missed:

Dolly Parton: “Such a great asset to my theater, you’re great”

Glen Campbell: “You floored me when you sang… very talented man… it’s so hard to ride and sing at the same time, it’s incredible”

Music Country News, Brian Seitz: “Not only an excellent horseman but a fine vocalist”.

Curtain Call Joe Straughan: “The most original and entertaining show in the region… little wonder he has been named Variety’s Showman of the year”.

The Sun Herald: “Like nothing you’ve seen before… the audience rose as one in stunned disbelief – then pandemonium”.

With hundreds of electric lights encompassing Greg and his four-legged friend, the two weave in unison through the crowd while Greg sings in full voice without missing a beat, stopping now and then for a high speed spin or rear, totally captivating his enthralled audience. When you combine Greg’s equestrian skill and showmanship with his unique whip-cracking act reminiscent of the Man from Snowy River; his comedic sense of humor and exceptional vocal ability, Greg’s show is an exciting and fun-spirited ride that can only be described as – SPECTACULARLY ELECTRIFYING!

Greg and Starstruck have performed amid crowds of over 50,000 people, from major convention centers, such as The Mirage Las Vegas to the Sydney Opera House - from open-air festivals to boardrooms and private parties for Prime Ministers and notable royalty, including: the Duke and Duchess of Kent, the Princess of York and Australian Prime Ministers, from the Honorable Robert Hawke and John Howard. Starstruck was the first animal ever to be allowed to enter and perform inside the “Great Hall” of the Parliament House in Canberra, Australia. Greg has won numerous awards, including Australia’s prestigious Mo award for Country Entertainer of the Year & Variety’s Showman of the Year, as well as representing Australia at the World Expo in Japan. He’s also performed along with such distinguished entertainers as: Sammy Davis Jr., Dolly Parton, Glen Campbell and Wayne Newton. The International Variety Club first invited Greg and Starstruck to Orlando, Florida USA for The Humanitarian Awards to honour Mr. Arnold Palmer at the Disney Convention Centre and his mind blowing performance paved the way for a successful entrance into the USA. This was followed up at the International Variety Awards at the Mirage Hotel in Las Vegas. Dolly Parton’s Dixie Stampede immediately signed Greg and Starstruck to open her brand new venue saying “…at the Grand Opening of my Dixie Stampede in Branson, Greg and that horse of his stole the show and I couldn’t tell if the audience was clapping for me or this Australian cowboy…” Greg was then invited to join the Dixie Stampede in Myrtle Beach, South Carolina. Dolly com 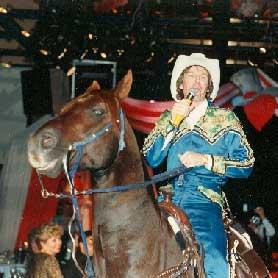