It was February 1980 (10 months before the untimely death of John Lennon) that Australia's first concept show THE BEATNIX was conceived and produced by Tony Dean - founding member and manager. Originally put together for a four week season in Perth, Western Australia, the shows proved so popular that it was decided to make the move to Sydney. Since then THE BEATNIX has established itself as a "must see" throughout the club and hotel circuits, and is in constant demand by the corporate sector. The show has toured south-east Asia including seasons in Hong Kong, Bangkok, Malaysia, and New Zealand.

BEATNIX - THE BEATLES SHOW captures the excitment and atmosphere of The Beatles early concerts in the first part of the 1 1/2 hour show, consisting of the typical early 60's outfits and featuring songs such as "Twist and Shout" "I Want to Hold Your Hand" and "She Loves You". The second part of the show sees an impressive change of colour and mood set by the legendary "Sgt Pepper's Lonely Hearts Club Band" costumes and includes songs from the most significant album in Rock History. The trip continues along "Penny Lane" to include songs from all the later albums.
"Everybody sings along all night"
At a time when nostalgia is on everybody's lips BEATNIX - THE BEATLES SHOW stands out on the local and International  entertainment scenes as the show to suit all occasions - be it large concerts, corporate parties, gala events, product launches, presentation nights, school formals, fund raisers, clubs and hotels, even a private party in your own home, this show has the widest possible appeal and is fully self contained with quality sound and Lighting
The Beatnix concept was conceived and assembled in March 1980 by founding member Tony Dean, rhythm guitar/vocals, [now retired to full-time management] as a live performance entity. This puts it amongst the longest running Beatles Tribute Shows in the world. It is certainly the most imitated Beatles Show down under and we are truly flattered.

The Beatnix show includes fully authentic musical instruments similar to those used by The Beatles. These include very rare and valuable guitars by Gretsch, Hofner, Rickenbacker and Gibson, Vox AC30 guitar amplifiers and a Vox AC50 bass amplifier with a T60 bass cabinet.

The drums are identical to the ones used by Ringo, a 1960's model  Ludwig Black Oyster Pearl  kit complete with Zildjian cymbals, The Beatnix have the real vintage equipment.

This combined with a range of early period Beatle costumes and the colourful Sgt Pepper's  Lonely Hearts Club Band outfits give you the complete Beatles experience.  You will believe you are seeing the real Beatles.

The Beatnix Show has performed extensively overseas including several seasons in Hong  Kong, Malaysia, Bangkok, New Zealand and we have even performed for Royalty in Brunei.
Domestically they have done them all from large venues ie. ARL Grand Final at the Sydney Olympic Stadium [with over 100,000 people] Darling Harbour [with The Merseyside Orchestra] Sydneys' Taronga Zoo Twilight Concert Series, The Melbourne Zoo, Vodaphone Stadium, Sydney Opera House, The Gove Peninsular Festival, Alice Springs Race week, Gold Coast Wintersun Festival to smaller more intimate venues ie. The Basement, numerous weddings and birthday parties including shows on Sydney Harbour cruise boats and even a party for 50 people in a back garden setting in Surry Hills.

There have also been many television performances including  Hey Hey Its' Saturday, The Midday Show, Good Morning Australia, The Don Lane Show, Ernie and Denise, Simon Townsends' Wonderworld, Donnie Sutherlands' Sounds, and appearances at Beatle Festivals in Adelaide, Melbourne, Auckland and four Beatlefests in Sydney.

The Beatnix have also been professionally recorded on the noteable "It's for you" lost Beatles tracks album, "Stairways to Heaven" with the "Money or the Gun" album and numerous T.V. and radio commercials including The Soothers ad, Arnetts Shapes, Browns Choc and you may have seen the "Hertz" ad with the guys [complete with bass drum] in the print media.
TYPICAL SONGLIST

Makes you want to sing along just looking at the list 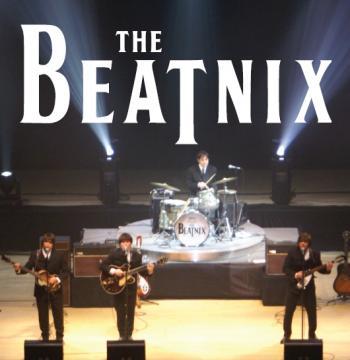