Travel and accomodation required for all shows not in Sydney

After spending over a decade as one of Sydney’s premier club DJ’s, entertaining thousands of people nationally and internationally, Bill now dedicates his life to the entertaining and healing benefits of Hypnosis. As a fully accredited Hypnotherapist and NLP trainer he has empowered hundreds of people to overcome everything from drug addiction to emotional trauma. It only seemed natural that with his entertainment background that he take his hypnotic skill to the stage.

His on-stage volunteers become the stars of the show, as Bill takes them deep down into a hypnotic trance, enabling them the opportunity to experience heightened creativity, increased relaxation and sharpened mental empowerment – all to the unending delight of audiences.

It is with his participants in this hypnotized state, that Bill builds his enormously entertaining performance, delighting participants and audience members alike together with his fast-paced wit in a superb, unforgettable one of a kind performance. Each participant will react differently to the suggestions offered, so no two shows are ever alike! Because of this unique factor, Bill is able to personalize the performance to fit any event or corporate function. The performance is 60 minutes of pure enlightening fun!!

Both participants and audience are guaranteed to come out of Bill’s show feeling more energized, alive and full of life than when they walked in.

If you want your next event to be one you will never forget, with a show that your audience will be talking about for months, then look no further than the

“I recently had the pleasure of having Bill Wheeler perform his Hypnosis Show for my daughter’s 21st birthday party. Everyone was enthralled by Bill’s talents, as he very quickly hypnotized my daughter and about 20 of her friends. I would not have believed it if I hadn’t seen it with my own eyes. They then proceeded to entertain the rest of the guests in a totally uninhibited fashion. Yes, a real hoot. The show was hilariously funny and topped off a fantastic day." Thanks Bill

I have to say that Bill Wheeler gave one of the most intriguing and funniest performances that I have ever seen. He was an absolute hit wth our 500-plus audience and made our evening for Bing Lee something very special.

"I had the pleasure of hosting a 2-day conference for Aristocrat at the Fairmont Resort at Leura recently. We had many interesting and informative speakers but the highlight of the two days was, without doubt Stage Hypnotist Bill Wheeler. He certainly knows his stuff and had everyone present at the dinner totally enthralled and highly amused with his patter and the antics of his "victims". Most entertaining and can obviously tailor his act to any demographic - great stuff Bill!"

John achieved national recognition through his pivotal role as the voice of Australia's longest running variety show Hey Hey It's Saturday which ran for an amazing 28 years on the Nine Network from 1971 to 1999.

Companies performed for include

2 x T – Stands (not required if venue has lighting bar)

Plus Set up and delivery

Please make sure the is at least 2 – 3m  free space in front of stage.

20 or more Chairs (depending on stage size) 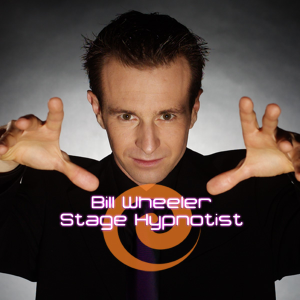