Bublé Crazy Love
The Hits! The Inspirations! The Beginnings! The Love!

The style popularised by the likes of Frank Sinatra and Bobby Darrin is now as popular as ever, due in no small part to Michael Bublé who has been almost single-handedly responsible for the rebirth of big band music
The Buble Experience is not a tribute to Michael Bublé, but rather a salute - Greg Aspeling’s unique and smooth renditions of Bublé’s work makes his performances enthralling, and, with a vase of red roses on stage to hand to some lucky ladies, really sets the scene......
With an outstanding 12 piece Big Band and special guest Katey Aspeling (an absolutely stunning female vocalist), the show is non-stop top-class entertainment
The second half of the show concentrates more on Bublé featuring all his contemporary hits - Kissing a Fool, Just Haven’t Met You Yet, Home etc. Greg also covers Bublé’s versions of classics like All of Me, Foggy Day, Crazy Little thing Called Love, Cry Me A River, and many more
As stated, this show is NOT a tribute, as Greg Aspeling is not trying to look nor sound specifically like Michael Bublé – however the music and production are pure gold.
Tailored to your event

Greg & Katey Aspeling are a unique father and daughter duo

Having begun their singing careers, nearly by accident, just a few years ago, in 2007, when they were both cast in the Arts Centre Gold Coast's production, Broadway In Concert they  have since quickly gained popularity with their vocal dynamics and their smooth, sophisticated interpretation of the jazz and swing classics. Based on the Gold Coast, Greg & Katey regularly perform with an 11 piece Big Band. The two also perform with their smaller band around south east Queensland with some of Australia's finest musicians providing quest performances

"Bublé Crazy Love".  First launched in April 2011 to a sellout audience in the Paradise Showroom at the Arts Centre Gold Coast for the Gold Coast Jazz & Blues Club

Opening with Feeling Good & segues into Crazy Little Thing Called Love. Then on to......

With Michael Bublé and Dianna Krall changing the way the younger generation has embraced the standards, most of the songs are backed by these fabulous "second generation" arrangements.

Today's modern song stylists - Michael Bublé, Diana Krall, Robbie Williams, Jamie Cullum - have kept the legacy of "jazz/swing" standards alive. And so has Greg & Katey Aspeling. From a bluesy performance of the Robbie Williams arrangement of "One For My Baby" to the upbeat, jazzy "Too Darn Hot" from Ella Fitzgerald, you will be absolutely thrilled with these performances.

Performances over the last few years have included solos in the Gold Coast Arts Centre's musical production, "Broadway in Concert" , before a packed house for 5 shows. Solos performed included the classic "The Lady Is A Tramp", written in 1937 and popularised in the 1959 Frank Sinatra movie, Pal Joey and Franki Valli's "Can't Take My Eyes Off You".

You will be blown away by the great vocals of Greg and Katey. The two have just recently added 2 great Michael Bublé duets, Down With Love and Baby You've Got What It Takes.

The following songs are not all performed with the Big Band but is a mix of backing and small band: 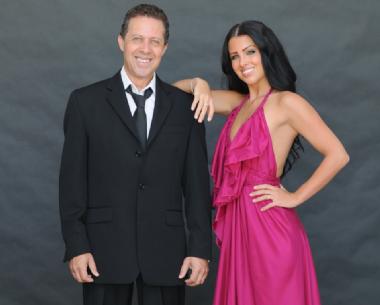