After performing to capacity crowds right across the country, now it's your turn to experience the power of the very big, the very huge, the very massive Chunky Custard and their explosive 70's and 80's show. Chunky's one of a kind look ( not to mention sound ), has inspired an international cult following.

A star-studded musical extravaganza, complete with spectacular stage sets, dazzling costumes and a cast of sizzling stars which include:

and much, much more... an Extravaganza not to be missed.

CHUNKY CUSTARD - The show, the party band, the zany 70's and 80's extravaganza. Chunky Custard are a professional musical and theatrical Rock Cabaret Show Band. The band performs the classic music hits of the 70's and 80's. Chunky Custard is one of Australia's most successful show bands. The band has been entertaining audiences of all ages for more than nine years. Major events, clubs, corporate functions and festivals all over Australia have taken advantage of the acts wide appeal including: and many, many more. A list of companies employing Chunky Custard to provide entertainment for their corporate dinner and functions include: ...to name a few, plus hotels, clubs and theatres Australia wide. MARKET APPEAL:
Chunky Custard is known for their user friendly qualities which are guaranteed to liven up audiences of all ages and walks of life - with many remembering the event when other nights are long forgotten.

FEATURES:
Chunky Custard's revival 70's and 80's show brings back to life the popular hits made famous all over the world such as... 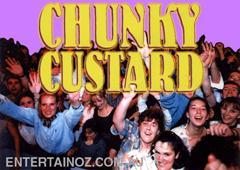