The trio features Anton Teese on violin, Wylva Teese on double bass and Endel Rivers on guitar.  The band loves playing gypsy music because of the combination of instruments and their common attraction towards the beautiful melodies, dramatic mood swings and high energy inherent in this Eastern European musical style. They found a wide range of audiences responded positively to the music because of it's haunting melodies, passion and liveliness. The band has also pursued the very gypsy tradition of serenading people at their tables and attempting any special requests thrown their way. The barriers between the band and the listeners break down - the audience often joins in singing and are more willing to get up and dance.  Because of the diverse groups of people this band plays for, other European music crept in. Hence the equally exciting styles of Tango, Jewish, Russian, Spanish, Turkish, Italian, Greek, Irish and Latin are explored. Equally important, Continentl Drift plays Classical music, Beautiful Ambielnt Music and Swinging Jazz and Latin styles, tailoring the mood of the function to suit the venue and client. (ranging from beach shirts at poolside parties to black tie functions).

Continental Drift also has a fully self contained mobile set-up which means they can play in several positions in large venues, ie. Markets etc.

CONTINENTAL DRIFT' present a smorgasbord of music from the cafes of Europe to you (via St. Kilda). We're serious about having fun.  See the string trio adapt to the mood of the night right before your very eyes.  Be amazed at the violinists' speed and skill as he attempts the impossible and creates the unforgettable.  Be entranced watching the bass player- careful,  her enthusiasm is catching ! Be touched as the Trio melts your heart with golden oldies, romantic and soulful.  Be dignified as you sip cocktails to classical music.  Be relaxed as the band play background melodies for conversation with friends.  Be daring and tour the world from the comfort of your table.  Be incited with hidden passions by wild gypsy music. Be serenaded at your table and request your own special song.  Be inspired to dance the night away - a Viennese waltz swing jazz to keep the joint a jumpin' cheek to cheek in a tangle of tangos a frenzied tarantella join a greek circle dance or bring down the wells as a Russian Cossak.  Be entertained by us for some real good times.

JAZZ STANDARDS Stompin At The Savoy Just a Gigolo Is You Is My Baby Smoke Gets In Your Eyes It Had.To Be You As Time Goes By All Of Me Honeysuckle Rose Chattanooga Choo Choo Too Marvellous For Words Sunny Side Of The Street Blue Moon Swing 42 Misty Take 5 Autumn Leaves Summertime Minor Swing In The Mood La Mer Big Gig Theme The Very Though of You Time On My Hands , Its Only A Paper Moon Straighten Up The Way You Look Tonight Don't Get Round Much Anymore Sweet Georgia Brown Dream A Little Dream Petite Fleur Aint Misbehavin, What Are You Doing For The Rest Of Your Life 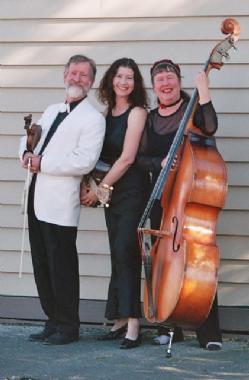