Following the success of two award-winning albums, FIVE O'CLOCK SHADOW and CASH LANDING (lush orchestral and swinging big band renditions of contemporary pop classics) Frank Bennett's unmistakable talent, personality and panache have led him to become one of the most popular and sought after entertainers in Australia today, performing for audiences in excess of 100.000.

In 1997 Frank was invited to officially open the prestigious SHOWROOM of Sydney's STAR CITY CASINO with Tom Jones and subsequently performed twenty-eight concerts there in the first month with his eighteen-piece band 'The Sydney All Stars'.
In 1998 Frank Bennett opened in Sydney and Melbourne for the great Burt Bacharach on his Australian tour.

Frank's uncanny ability to recapture the magic of Sinatra in concert is cleverly balanced by his penchant for performing contemporary pop hits a la big band.
In short, Frank has over twenty years experience in show business and possesses a charismatic and seductive stage presence. He lays claim to a myriad of accolades and awards but what that all gets down to is the simple fact that Frank Bennett has one incredible voice!

Like any gifted musician, Frank Bennett's appetite for music probably developed in the cradle but from there was weaned on a diet of sixties and seventies radio. Yet while The Beatles, Jimi Hendrix, The Beach Boys, The Fifth Dimension, Stevie Wonder, The Rolling Stones, The Doors, and a thousand other great acts dominated the airwaves and incited change, the carefree and elegantly sentimental sounds of yesteryear were always lingering like the steamy waft of Old Spice from a freshly vacated shower. As with the best of any art form, good music carries its legacies through the years and sometimes perpetuates itself in bizarre and beautiful  manifestations. 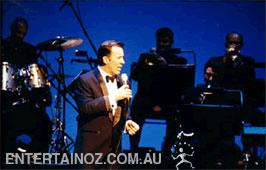