Welcome to the wacky world of George Haddon, Melbourne based cartoonist and illustrator.

Haddon has won numerous national awards for his drawings covering a wide range of assignments and commissions of faces and places from Prime ministers to pop stars and from China to Coober Pedy. He has become known throughout Victoria, first for his illustrations and astute political cartooning in the Melbourne Herald (now the Herald-Sun) and then for his decade of centre spreads in the RACV monthly magazine RoyalAuto which has a readership of nearly two million.

Now his hilarious and popular caricatures are in demand to entertain your clients and guests at corporate functions, trade fairs, conferences, training seminars, club nights, staff end –of- year parties, fund raising events, product launches, and celebration dinners, where they get to take home a special memento and reminder of the occasion.

He has been commissioned to draw at events around Australia and internationally – even on the high seas entertaining fellow cruise passengers with his caricatures, lectures and demonstrations.

On-the-spot caricatures take 3-5 minutes and are drawn in dark sepia conte on A3 size paper.

Caricatures for special occasion presentations such as retirement, farewell gift, anniversary or birthday, are drawn in full colour on quality watercolour paper.

Who has commissioned Haddon?

Client to provide: Table & 2 chairs in a well lit area, refrehments and parking close to venue 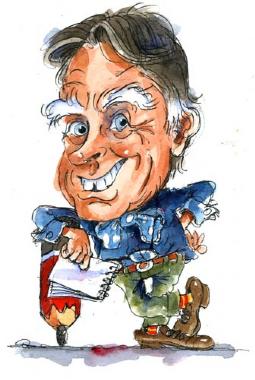