The “Paul Robert Burton Band” is a musical collaboration, presenting to the public an expanding ensemble of world-class virtuoso musicians from an infinitely wide variety of musical styles and genres. Every player is unique, however they all have something very much in common, commitment and dedication to the Arts. Music can transport the soul to higher realms and these musicians together invoke that feeling.

“ We can easily say that Paul Robert Burton and his band were the standout act at this year’s Kiama Jazz & Blues Festival.  Where ever he played and in whatever venue (café, outdoor concert, club) or line up (from solo to full on band) the crowds were huge, bopping and excited. Venues were full to capacity and then some!  During a  sidewalk café appearance, the crowds spilled onto the street & stopped traffic!  Apart from his musical gifts, Paul was appreciated by festival management as a source of information regarding other artists, and brought great energy, inspiration and spirit to our Festival.  People raved for weeks afterwards, and purchased Paul’s CD’s aplenty, and we have had considerable requests since the festival as to where & when Paul might play again. ”

Paul Robert Burton is a Multi-tasking, Multi-instrumentalist, Singer, Songwriter, Producer and Sound Engineer. Beginning his career some 29 years ago as a session musician, Paul has performed with Elvis Presley’s drummer D J Fontana, James Brown’s drummer Toni Cooke and has an extensive list of musical associations with a veritable “who’s who” of the Australian Music Industry.

He combines rich vocals, traditional acoustic instruments and modern technology together to perform music as the universal language of unity.

His current musical ventures include: promoting his albums “The Calling” and “Invocation”; playing at many festivals, ticket shows and a variety of environmental & human rights events throughout Australia and Europe; performing either solo, duo or trio and with his band; managing, recording and performing shows with many other artists. 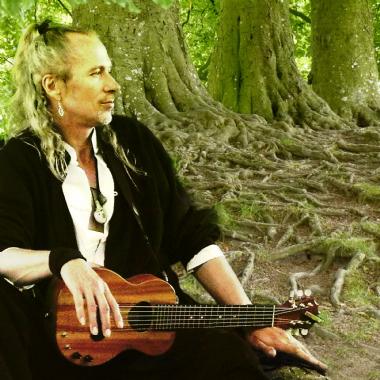