Formed on 26 January 1981, to play in the musical production of Reedy River, THE INLAND NAVIGA'T'ORS have enjoyed 20 years of performing at Bush Dances, theme events, celebrations, corporate events and major tourist attractions.

THE INLAND NAVIGA'T'ORS are known to many for their television appearances on Channel Nine's Morning Show and their rollicking performances at The Vinegar Hill Woolshed, Darling Harbour and The Rocks.

With songs of shearers, farmers, stockmen, convicts and the old Sydney scene, and a mixed bag of Celtic, European and American tunes, The Inland Navigators give a true representation of Australia's musical heritage.

The traditional dual lead instrumentation of FIDDLE (Barbara Webb) and CONCER'T'INA (Greg Wilson) is ably supported by the rhythmic GUI'T'AR of Steve Errey and BASS GUI'T'AR of Tony Moffatt. Lead singer Eric Pellinkhof is a LAGERPHONE legend. This bush instrument was originally made from beer bottle caps nailed to a piece of wood. Eric has perfected a contemporary version, fashioned from aluminium in the shape of Australia! To see and hear him in full cry, beating the lagerphone in time with a jig is awe-inspiring, to say the least.

All the musicians are also fine vocalists and in songs such as "Poor Ned", about Ned Kelly, the five voices blend superbly. Little wonder, the international tourists, for whom the band regularly plays, are so impressed.

The Inland Navigators have recently recorded their second album, which features a great mix of traditional and contemporary songs and tunes. 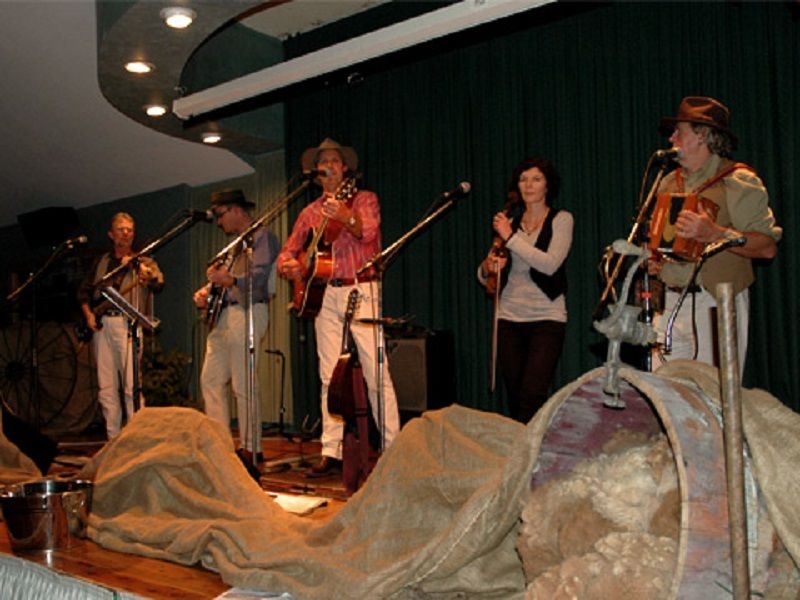