Looking for something a little different for your next birthday, office, or Christmas function? Why not add a little sparkle to your next big party? Nova China is a drag entertainer extraordinaire, who will turn your dull as dishwater gathering into a glitter bomb explosion that will be the talk of your social circle!

Nova was awarded the 'Melbourne's Most Popular Drag Performer' award at the prestigious 2008 ALSO Awardsand has performed at all of Melbourne's gay nightspots including The Gh Hotel, Heavens Door, The Xchange Hotel, DnM Hotel, The Peel and Priscilla's, as well as other venues including The Martini Lounge, The Belgravia Hotel and Neverwhere.

Currently starring in Melbourne's largest and longest running drag show 'The Classics' at The GH Hotel, Nova has also starred in many other shows throughout Melbourne, both large and small, including Jungle Fever, Heavens Angels, Shaken Not Stirred, Feverish, and has made guest appearances all over town and worked interstate at events such as The Tasmanian Gay and Lesbian Festival.

Nova has also made television appearances on The X Factor, Australia's Next Top Model and appeared as an extra in the movie 'Strange Bedfellows' starring Paul Hogan.

Specialising in emceeing and glamorous show spectaculars, Nova combines her flirtatiously poisonous wit, her equally as poisonous good looks, and a little bit of charisma, all stuffed into a 7 foot tall frame!

And if you're looking for something more, Nova’s Sisters of Sequin is a brand new drag production show starring Nova China and featuring Sasha Fagg and Jacqui Mioff. The theme of the show lies with old school drag performances, and features plenty of feathers, sequin and humour, as well as having a modern element in song choice, dance style and the youth and vibrancy of the performers.

The show consists of six production numbers, each featuring all of the girls, and all fully choreographed and costumed.  The show was designed to be split into two halves. A talk spot in each show enables costume changes to take place.

The costumes were made by Nova and in true drag style utilise colourful fabrics and plenty of sequin! The show is choreographed by the classically trained Sasha Fagg.  Please see the media gallery for images. 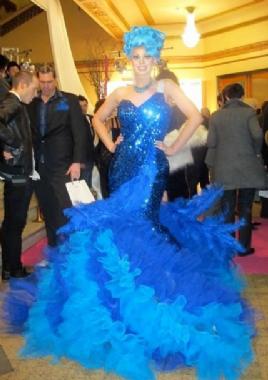