You'll be amazed at the fun to be had with Showbags at your event. See them on TV in Drags Aloud, in the movie Strange Bedfellows, on stage.

Experienced, professional, talented, and totally entertaining. Showbags has entertained everyone from Steve Bracks at the Glitter Ball to Hen's parties and special Birthdays. Do you want a glittering special guest with a difference? Someone to snap pictures of your guests, someone to surprise and amaze, then Showbags can give you solo, duo, trio in fact whatever the size of your event Showbags can help. Showbags has performed before twenty thousand people and for just ten. Big or small your event will be special with Showbags Drag Show on board.

Showbags is Comedy, Costumes, Glamour, Laughter and Excitement.
Showbags shows are enjoyed by all ages and people from all walks of life.
Showbags on Stage
As individual perfomers Showbags entertain and amuse, dazzle and amaze.
Showbags will invite you into a glamorous world of fantasy and imagination.
Showbags tailor their shows to suit each venue, and its show time requirements - and they deliver what the audience expects, a great show.
Our shows are presented to pre-recorded sound tracks, and the audience is invited into the performance to clap and sing along to a range of popular and accessible songs.
Showbags are experienced hosts, comperes and public speakers. Solo, Duo, Trio or as large as your imagination allows you'll find the Showbags professional, dedicated, and entertaining.
Whether you're looking for a solo performer to "meet and greet with photo opportunities", or if you're after a "highlight of the night" large show presentation, Showbags will bring you the best.
Biography
Showbags has performed before record breaking crowds at entertainment venues in Melbourne and have been invited to present their spectacular shows across Australia.

Showbags have testimonials from stage directors, film makers and theatre critics congratulating them on their shows, their entertainment value and their commitment to excellence.
They have performed before thousands of enthusiastic fans at community festivals and they have performed for dignitaries such as the Premier of Victoria and for heads of multinational companies.
Showbags were invited to join renowned media celebrity and comedianTracy Bartram for three consecutive years as opening and support for her very successful 'Rawhide' and 'Live' tours.
The Showbags were featured in the ARIA Award Winning Video Clip 'Do It With Madonna' by the Australian band 'Androids'. Showbag Jessica James became a well known face on Australian television when the song remained in Top Ten playlists for weeks.
Amanda became 'the face' of McCafe, featuring in a National campaign for the fast food chain McDonalds. She also featured with Australian film icon Paul Hogan in his 2004 comedy 'Strange Bedfellows'.

In 2007, Showbags renamed themselves 'Drags Aloud' and became the first ever Australian Drag Show to perform off Broadway in New York, on London's West End and at Ediburgh Fringe Festivals in 2008, and 2009. 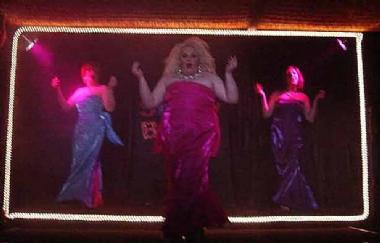