From her experience of working in Sydney's Entertainment Industry, Melanie brings amazing artistic flair,passion, charisma, fun and professionalism to any event in and around the Mid North Coast.

Melanie began her face painting career in Sydney, 1998, & was inspired by the Austrian Artist /Performer Joe Joe Freeman. Together they formed a partnership in Sydney called Joe Joe Juggles Entertainment .

Melanie loves the travel and variety assosciated with her work and her art takes her up and down the coast.

Only the best quality face painting products are used in her work.

Most recently she has worked at -

Just because Mel is invoved in the big stuff doesn't mean she'll miss entertaining the kid's at your private party!(or the adults for that matter)

Her artistic flair along with her love of colour and experimentation has won her alot of praise and admiration relating to her work. She loves face painting as it brings so much laughter,fun & happiness to people of all ages.

"I love the way adults and children change their character when I paint their faces. People are amazed at the transformation"

Due to her many years in Hospitality work (she has an ASSOSCIATE DIPLOMA OF HOTEL MANAGEMENT) she is very good at communicating with all people of all ages and working with small groups to large crowds.

Melanie now lives in Coffs Harbour and is excited about sharing her art in many ways. She is constantly experimenting with new faces to bring fun, laughter and surprise to her models.

Major Companies, Corporations & Events she has performed at include

Melanie worked at many other private parties, functions,openings and events along side other entertainment such as clowns, stilt Walkers 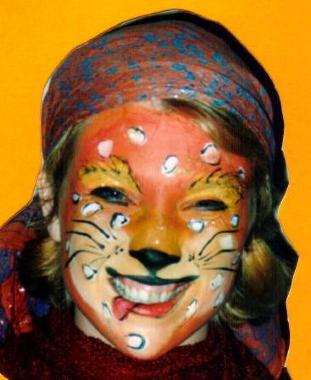