Djinn and Vyvyan are two of the leading fire artists in Australia's longest established fire troupe. With a combined experience of over 20 years in the scene they were at the forefront of the rise in popularity of fire performance and today hold a reputation for producing dynamic fire shows over many years.

Djinn the Fire demon is a versatile performer with a host of skills including Staff, Double staff, Poi, Fire-eating and manipulation, body transfer and Fire-breathing. Djinn has fully choreographed fire shows and is renowned for his extreme fireballs and daredevil antics.  He's a licensed pyrotechnician and has many film credits and fire stunt advisory roles. Djinn is certainly one of Australia’s leading and most reputable Fire artists.

Vyvyan is one of only a handful of professional female fire performers and definitely the most accomplished in Australia. Vyvyan performs the above skills including fire breathing, with a couple of extras including Devil-stick and Hula- hoop. Vyvyan is also a seasoned instructor in circus and fire skills, tutoring for Circus Oz, CAE & Melbourne University as well as private workshops.

Djinn and Vyvyan have a number of solo and duo fire shows to suit any event; from fire eating and fire breathing displays to fire poi, double staves and even flame throwers, all the fire arts are covered and are perfect for small and large events. For something different, there are the Angle grinding and Bed of Nails Freak shows which are sure to turn heads.

Some of the notable acts that can be seen in Djinn and Vyvyan's shows include ‘Can you top this?', pyro’s in a fire-eating competition and the stunning tandem fire breathing display with its explosive effects that make for one of the most dangerous and spectacular moments of any fire show.... Not an easy feat and very risky. 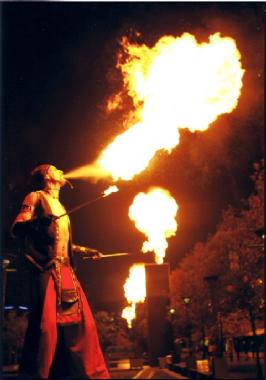