Being at the forefront of the world fire spinning industry, Chris’s incredible fiery techniques are sure to leave you Mystifired! Not content with just being entertaining Mystifire is a show that pushes skill and conceptual boundaries.

This fully choreographed, powerful show incorporates a wide range of fiery skills including single, double & triple staff, poi, rope dart, dragon staff and blades, as well as some impressive acrobatics to top it off!

“Chris Carlos was fantastic, he was on time and easy to work with. Many guests commented on his performance and were very happy.”
- Carly Lindsay (Events Assistant, Geelong Cats)

One of Australia’s top fire performers Chris has performed across the world and won awards internationally for his high calibre fire skills. In 2009 Chris successfully organised and ran “SpinFest”, Melbourne’s first fire spinning convention which attracted participants from all over the world. 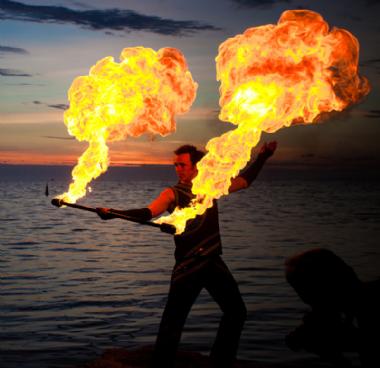