Performed by David Leach, a highly recognized and professional solo fire artist, the Solo Fire Spectacular is a powerful and yet graceful show that will captivate any audience. This fully choreographed show involves mammoth amounts fire, an impressive range of fire skills and unusual fire tools. Three sectional-staff, duo cross staffs, blades and a fire sword all add an element of uniqueness that makes this show unlike any seen before.

David Leach is an energetic and versatile performer with skills ranging from fire and circus to puppetry and magic. Graduating from VUT‘s Performing Arts Course in 1999, he has actively performed throughout Melbourne and Australia for over six years and has become recognised as one of the top fire artists in Australia. David is proficient in many fire skills and is noted for using many specialist props such as fire swords, a three sectional staff and duo cross staves to enhance the uniqueness of his shows. David is currently a director and key performer of ‘Cirque Mystique’ an innovative performance group based in Melbourne .

Safety:
David Leach carries $20,000,000 Public Liability Insurance and a perfect safety records. The Solo Fire Spectacular includes the presence of a fire safety officer who is at hand at all times with professional fire safety equipment. David’s comprehensive safety code of practice allows him to perform at high-class venues such as listed below.
Previous shows & venues:
Some recent shows and venues David has performed fire at include: 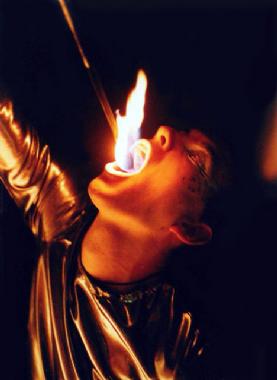