Don't risk it- get an experienced professional with a no incident record- full professionalism = no hassles entertainment, so you can relax and enjoy your event. Adelaide can now offer show stopping fully choreographed Fire Shows, comparable to leading international performances. Sparky has vast experience choreographing and performing across Australia, both as a soloist and managing Fire and Hoop Shows.

Impress and delight your guests with a spectacular fire show that people will talk about for years to come. Sparky's specialty is a a short attention grabbing performance using multiple Fire Hoops or Hoops and Poi together (about 5 minutes)*

Other popular shows include a variety of apparatus ( may include staff, double staff, poi, ropes, fans and HOOPS! ) used in a longer show or several short presentations

Let Sparky wow your guests from the moment they arrive with Fire or LED glow. Ambient/ Roving Fire options can be indoors (with venue permission) or outdoors.

"The show provided by Sparky for our event was professional, visually stunning, answered all the requirements, and was superbly presented"

“... the quality and performance was absolutely fantastic She was just a delight, and the show was ooh, uh and whistles that sort of stuff from the audience. Most of the guest had never seen anything like it before and kept asking how I found her etc... I thought sparkles was just brilliant and the performance spellbinding, ... you wanted to see more with the hooler hoop and how did it change colour was the question for the night...

Performance Experience. Audience sizes from a few people to over 40,000.

Performing As Part Of These Fire / Performance Troupes...

I am very energetic, fit and motivated (I am also a Fitness Instructor), and my background and references show my high level of organisational skills, reliability and conscientiousness. These qualities which are reflected in my consistent high achievements assure you a quality performance as I take pride in what I present, with a commitment to ongoing improvement in my skills.

I give safety a priority, but I am able to be flexible with space and music and I enjoy making a performance personal by using chosen music and telling a story through the movement. I am happy to provide more information to support my application.

Music system to plug in IPOD. 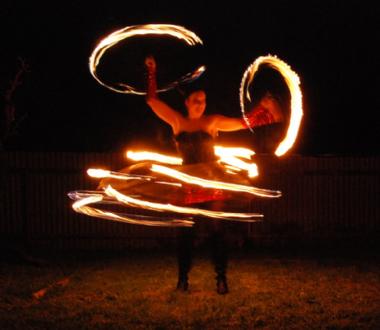