Phoenix is a regular performer on board the world's largest & most luxurious cruise lines, Las Vegas show rooms, Channel Seven's Morning Show, The Today Show and many other venues, internationally headlining Stage Hypnotist, Phoenix will bring laughter, and a fresh, modern take on Stage Hypnosis.

Every good mentalist should have both & history of, & strong understanding of hypnosis. Phoenix has trained with some of the world’s most renowned hypnotist’s both in Australia & as well as Las Vegas, & was mentored & trained by some of the UK’s top hypnotists.

Phoenix will often include a little hypnosis during his roving performances if requested by guests. Conversely, you can book his stage hypnosis show for a better glance into this mysterious world & see the hilarity that ensues.

Phoenix does, however, have a strong ethic of care, so if you are looking for routines to truly humiliate your guests or attendees, then this is not the show for you.

HOWEVER, if you want a smut free evening of hilarity & wonder, then you are at the right place!  Immense fun is most certainly still achieved, whilst caring for the stars of the show.

Phoenix uses several methods, but none is truly as astounding as the speed of his instantaneous induction, which is less than 10 seconds in most cases & simply has to be seen to be believed.

Perfect for corporate entertainment & events, Phoenix hosts a 100% clean stage hypnosis show, no smut, no swearing, & more laughs than any other show of its kind in Australia!

Attire can be iof an "Urban, Modern, Stand-up Comic" look, or a smartly dressed corporate look. Your preference is noted and acted upon.

This show is available all around Australia, from Sydney to Perth, Melbourne, Brisbane, Gold Coast or internationally, and no additional luggage is required or interstate bookings. 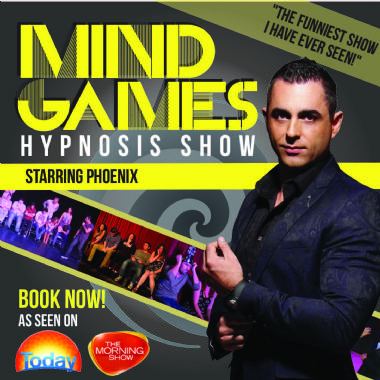