“HypnotiK” has been involved with Hypnosis since the age of 7. It wasn’t until at a later age he studied at college and received a degree in the area of hypnosis.  It became apparent that the next level was to take his talent and outgoing nature to the stage and entertain audiences with his ability to Hypnotise.

Not wanting to offer just another straight show of hypnotism HypnotiK’s other love was magic and eventually he moved onto illusion which he added to the show with great success.

Many audiences have already been spellbound by Hypnotik’s dynamic show. The show gives audiences the opportunity to be involved and being the first of its type, combining Illusion and Hypnotism makes it a must see show.

HypnotiK helps audience members find their true talents in his hilarious Comedy Hypnosis. This part of the show is a fast-paced blend of comedy, music and audience participation. You will laugh out loud as “HypnotiK” takes audience volunteers on a guided tour through their imaginations with outrageous results! The show takes entertainment to a whole new level!

Even the hardcore sceptics will walk away from this show believing the impossible and be thoroughly convinced.

An accomplished performer who creates bold and brilliant magic "HypnotiK” always challenges himself to mesmerize his audiences with the art of illusion.

Illusion and magic are something that people do not get a chance to witness live unless you go to Theatres or to Las Vegas.

In “HypnotiK’s” illusion part of the show the audience are left to wonder and get an opportunity to witness master Illusion in the arena of a sit down show.

Hypnosis is a VERY real thing and now you can see it for yourself!

Stage hypnosis is the only form of entertainment where the

Some remarks from the audience…..

"Brilliant- loved it. Everyone is still talking about The Magic of “HypnotiK”

“A great illusionist with all kinds of big illusions”

“One of the best live shows going around. A fun show filled with lots of

entertainment and laughter and amazing magic”

Hypnotik is available for the Hunter Valley, Newcastle, Mid North Coast and surrounding areas.  Hypnotik is ideal for all functions including Birthday & Anniversary Parties, Hens & Bucks Nights, Fundraisers and even Weddings. 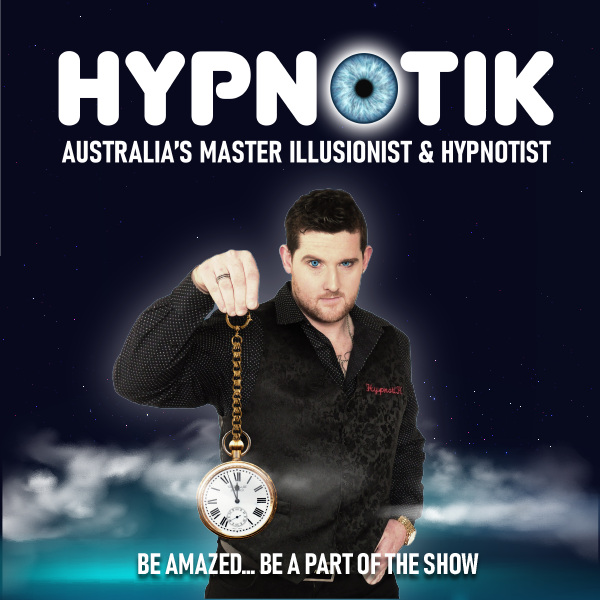