". . . I'm really quite famous. It's just that a lot of people haven't seen me yet." In fact most Australians have at some stage seen Marty perform, as he has appeared on every major television variety show in the country. He is perhaps best known for causing a furor on Ray Martin's Midday Show when he pretended to juggle two live kittens with a running chain saw, upsetting many short sighted home viewers... all in the name of comedy!

Marty's act is a clever combination of spectacular juggling, fire eating and death defying feats, all wrapped up with nonstop humour. Among his routines are the uproarious apple, bowling ball and egg juggle where he eats the apple during the stunt. There is the "dangerous objects juggle" atop a two metre unicycle where Marty enlists the help of the audience in getting started. And of course he likes to finish on his now famous chainsaw juggle (sans kittens for the stage act!). With or without cats his deftness for combining hilarious patter, visual surprise gags and tension building stunts always keeps the audience on the edge of their seats.

Marty's credits include the highly successful 1987 national capital tour of the Broadway musical Sugar Babies. Critics said he "stole the show" when he performed his solo field directly before finale, and called him "Australia's funniest American juggler".

With his high impact thirty minute show Marty has always been in huge demand as a guest artist for Australia's biggest touring acts. He has also supported international acts such as John Cougar Mellencamp, the Everly Brothers, Thelma Houston and Isaac Hayes.

In more recent years Marty, now an Australian citizen, has become one of the most sought after comic performers in Australia's corporate market, performing at events for Mercedes Benz, AMP, National Mutual, Sony, IBM, Commonwealth Bank and Elders just to name a few. He has entertained at private functions for Kerry Packer, John Singleton and Prime Minister Paul Keating. This popularity is partly due to the large doses of sidesplitting audience involvement, a real winner at functions from small groups to gala balls. It is also the powerful universal appeal and versatility of his show, an important feature when perfection and professionalism are the standards.

Just read what these clients have to say:

"We wanted entertainment and he gave it!"

"I can only highly recommend Marty's performance. He appealed to the audience perfectly and had a many standing ovations. Of course, it was a cocktail party."

"Everyone who attended our dinner enjoyed Marty's performance"

"Good sharp humour, easily accessible to all levels of sophistication.

"Provided a lot of fun and thrills. The audience involvement was great."

"He was a great entertainer and comedian; responded very well to the delegates."

"We have received terrific feedback from all of our attendees about the night, who all expressed their delight about Marty Coffey's performance. We would have no hesitation in booking him again for future events."

"Best act I've seen around here in years. Really livens the place up." 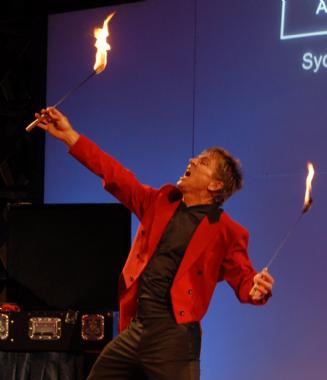