Mister Om is one of the world's foremost contact-juggler internationally recognized for his stunning and skillful routines and visually captivating performances. He is featured on the DVD, In Isolation (Beard Company,2006), a teaching video profiling 10 of the world's best contact jugglers.

In 2003 , Mister Om founded Aya Contemporary Circus as a duo (after 7 years of solo performance), which expanded to a trio in 2006. Their show "HELIX" received wide acclaim at festivals 11 countries across Europe , Australia and Asia. "Nirvadhi" his latest solo performance is a unique exhibition of contact-juggling , drawing the spectator into an awakening dream of unfolding possibilities.

Mister Om gracefully harnesses the elegance of this rare discipline to tell an awe-inspiring visual story. He also offers a spectacular and unique roving act as a performance inside a 7 foot transparent sphere a totally entrancing adventure of the imagination, captivating audiences of all ages. NIRVADHI A man, a ball, a ball, a man Who seeks stillness? Who is transitory? The man in contact with the ground, the ball in contact with his head. Who is the master of this dance? Witness - a breath, a vibration, a suspended wire... Balance? For whom is it natural? The ball or the man? Who wavers, teeters, and fears toppling? The ball alive on the round bone of his head, the man's feet agile, alight on the wire. Who dances for whom? 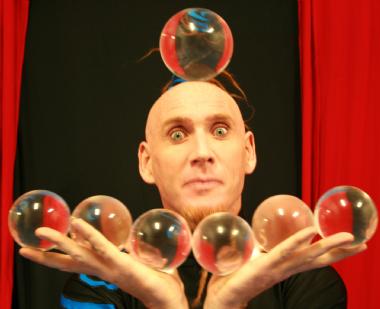