"Alex was brilliant! The only thing I'd do differently next time is have him roving for much longer" - Lucy Campbell, Swinburne University

"Alex blew our minds with his mixture of head-scratching magic and engaging banter. A must hire!" - Craig Oloughlin, Frucor Beverages

"Everyone in the team thoroughly enjoyed Alex's entertainment and they were totally energised for the rest of the day" - Kirstin A, Coca Cola Amatil

Looking for a magician who'll create moments of unbelievable magic your guests will remember for years to come? Alex's cutting edge wit and stunning illusions make him the perfect choice for any event that needs a touch of magic, and a touch of class.

Affectionately known as the gentleman’s magician, Alex uses a warm and charming manner to entertain crowds of all ages. Alex was named the Australian Society of Magicians most entertaining act (2011 and 2012), and has wowed audiences at Comedy Festivals across Australia with his hit show Gentlemen of Deceit. Whether you have a group of 20 or 300, Alex will tailor the perfect show for your function.

Some of Alex’s satisfied clients:

Critical acclaim for Gentlemen of Deceit:

"We'll be hearing a lot more of these guys in the future! 4 stars."  -Herald Sun

“There is not a moment of this show that does not inspire a gasp, a laugh, or more usually both. 4 stars.” -Adelaide Theatre Guide 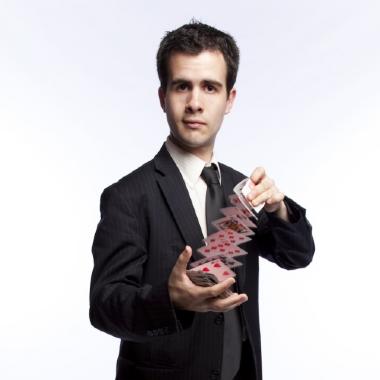