Joel A Wolthuis has been performing magic and mentalism across Melbourne for over 10 years. He has performed for audiences large and small. Both corporate and private functions. Whether it is his professional sleight of hand, predicting something that will happen on the night or bending spoons at will with his mental abilities, Joel promises to baffle the audience and make the night one to remember.

Joel has performed for the likes of:

Joel was a part of 'The World's Longest Magic Show' and has been mentored by one of Australia's leading mentalists and Hypnotists Jason D. Varga. Joel offers a variety of shows ranging from

Many of Joel's shows can be changed and fitted to suit your event. Here are some of the things that clients have said about Joel and his performances

"Joel is one young magician that will keep the art of magic alive by enthralling audiences young and old for years to come. Very skilled and very entertaining." - Jason D Varga (Leading Australian Mentalist & Hypnotist)

"I decided to hire Joel as a roaming magician for a friends 21st. The guests couldn't be more amazed and are still trying to figure out how to do the tricks they saw. Not only was Joel easy to deal with but the overall quality of his performance completely exceeded my expectations." - Private Client, 2016

"I would like to thank you for performing at my event. You baffled everyone with your mentalism abilities. I still don't know how you knew what I was thinking! Highly recommended!" - Corporate Client, 2016

Joel has perfected the art of magic and mentalism - so, can he read YOUR mind?!.. 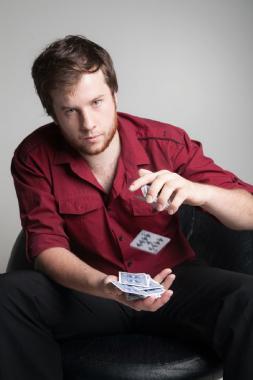