Make your next event amazingly successful ! Jon Blakeney is a magician based in Sydney Australia. He has been performing mind bending magic for over 20 years. Jon's show is tailor made for your individual needs, whether it be close up magic in a walk around type setting or a stand up platform/parlour show .

Jon performed an amazing show for the kids and adults at the New Theatre's Christmas Variety Pantomime. His style of illusion and sleight of hand amazed me and astounded the kids. A particular crowd-pleaser was pulling little glowing balls of 'Christmas Energy' out of thin air, out of kids ears and out of mouths and dropping them into a bag before making them all vanish. Every kid was bursting up in their seat hand high wanting him to grab some Christmas Energy from their ear, shouting and laughing. They loved it.

He makes the show fun and keeps the tricks coming thick and fast. Thanks so much for a great show Jon.

Josh Mawer
Director
Kids Club Christmas Show 2009 New Theatre,Newtown.
Jon entertained a tough crowd of 7 year olds at my daughter's party. The magic was excellent and kids and adults alike were all very impressed. Loved the rings, the rabbit in the hat, the levitating table and some amazing card tricks. Also the 'birthday energy' is a lot of fun!

Jon represents very good value for money, was reliable, showed up on time and great to deal with. Would call him out again without hesitation."

Hi Jon, Thanks for an awsome show at our wedding!!!! All the guests were wrapped in you tricks!!!! They havn't stopped raving about it!!!!

We would just like to say thank you Jon for a truly entertaining hour of magic,you left us all with our mouths wide open.

We will be passing your cards around to all of our family and friends. 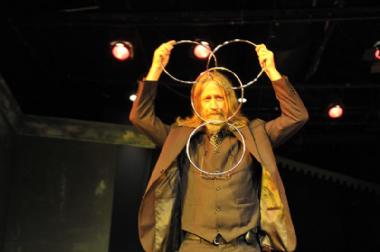